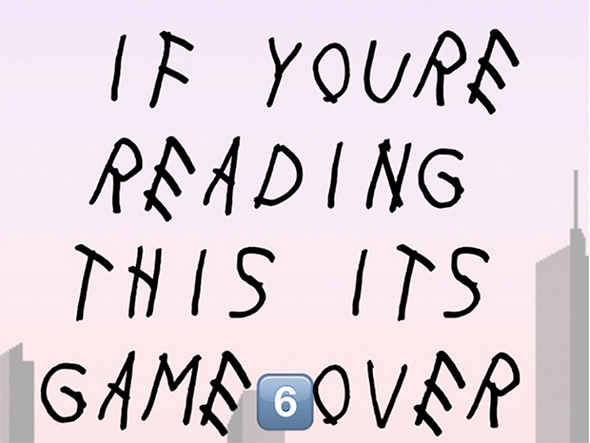 Aubrey Drake Graham’s voracious ambition is not satisfied, it would appear. After conquering the rap game (once again) two months ago with the release of a then-secret (most likely Illuminati-funded) mixtape “If You’re Reading This It’s Too Late,” Drizzy has now triumphed over a tougher, more dangerous game.

Our humble interwebs will never be the same. Not after the healthy dose of Drizzy Drake magic that it received over this past week. Following the release of a Drake-themed search engine, and an iOS side-scrolling platformer entitled Runnin Through The 6, the Canadian rapper seems to have all but cemented his position as Overlord of Meme-dom (until Meme-dom auto-refresh-resets a few hours from now and finds a different Overlord, of course).

Move aside, Google. Super Mario, who? Let Me Drake That For You works as both an exclusively Drake-related SEO, and a half-decent automated boyfriend bot (if you believe hard enough). And you’ll forget all about that smelly old plumber’s mustache after one glimpse at Drizzy’s bright, self-assured smile in Runnin Through The 6. So, basically, after a mere week of inhabiting the SEO and videogame space, Drake has effectively surpassed the reigning kings of both fields.

How do you do it, Drizzy?

Both the search engine and game are not official Drizzy projects. But creators Nico Uribe and Tyler Smith (respectively) seem to have channeled the master’s greatest talent; by taking douchey, raw Drake-materials and—through some kind of sorcery—turning it into entertainment gold. How do you do it, Drizzy? We may never know.

In Let Me Drake That For You, your web surfing isn’t about finding relevant or useful information. Instead, your search terms yield every instance Drizzy ever appeared alongside that subject matter on the internet. It’s an SEO that just gets what you need, without all those super complex algorithms. Like, when I Draked (as in “googled”) the search term “lions,” I learned that Drake got to “chill” with some lions once while visiting Dubai. And my life was made infinitely better for it.

The search engine not only has all the charisma of Drake’s internet presence, but also optimizes your experience with some choice Drizzy soundbites. I felt somewhat naughty when, upon Drake-ing the term “love,” Let Me Drake That For You returned with a resounding and charged “UUUUHHHH” Drake-grunt. Even the loading screens are Drizzed out, flashing phrases such as “fuck a fake search/where your real search at?” If, at the end of it all, you’ve somehow managed to not overdose on Drake magic, then you can click on the “I’m Feelin Drizzy” button, and see the world like you’ve never seen it before.

The videogame Runnin Through The 6 feels perfectly authentic to the Drizzy brand too. In retrospect, a Drake-themed game was inevitable. I mean who else respects the process of leveling up (like, you know, starting from the bottom—now you’re here) more than Drizzy? No one, that’s who. By giving you free run of the Toronto skyline (the “6” referred to in the lyrics is a nickname for the city), you run and jump, catching 6’s with all the woes you want. By collecting sixes, you go from 0 to 100 real quick. But be careful not to get too caught up in the game, because accidentally hitting a wheelchair icon sets Drizzy back to Degrassi days, when he played the paraplegic Jimmy Brooks.

But, you know how that shit go.