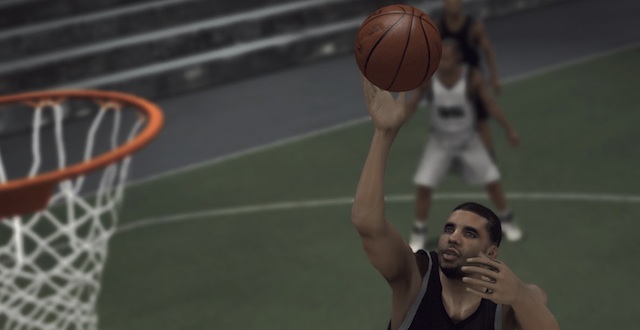 The following is a work of fan fiction. Any similarity to Drake’s real life is coincidental.

It was 5 in the morning. Drake couldn’t sleep. Too much on his mind.

He was still wearing the necklace from the club. It was gold and said “Drake” in cursive on it. Halfway through the night, he’d realized how stupid he looked wearing it. For a minute or two, he felt insecure. Then he grabbed another glass of champagne, said “Fuck it,” and kept it on. He did not find a woman to sleep with.

Drake had to pee. He got out of bed, put on his slippers, and trudged woozily down the hall to his bathroom. He wished somebody were here. To distract him. To keep him from dwelling upon the fact that he’d been playing NBA 2K11 every day for a month straight and still can’t beat Michael Jordan in “Blacktop Mode.” He was still a little drunk.

Just one more game, he thought to himself as he washed his hands. I can do this.

He went to his room, sat in his beanbag chair, and fired up his Xbox 360. For good measure, he put on DJ Khaled’s “I’m on One.” “This is my coldest verse yet,” he said. Nobody was around to hear him.

In Blacktop, Drake chose to play as himself. Like he always did. He’d been added to the game as a playable character in exchange for letting 2K Sports use “Over” on the game’s soundtrack. “Make my character real,” he’d told them while waiting to get face mapped for the game. “The real me.”

Right about now, he was regretting having told them that. The real Drake sucked at basketball. The real Drake was short, skinny, and couldn’t shoot to save his life. He’d been allowed the unreal-ness of being able to dunk, but beyond that, his skill set was pretty wack.

He warmed up by going up against a borderline-decrepit Shaquille O’Neal. Drake wondered if this was how the Allies felt after they’d toppled the Ottoman Empire in World War I. Drake smiled. He almost felt bad. Almost.

“Make my character real,” he’d told them while waiting to get face mapped for the game. “The real me.”

Before his match against Jordan, Drake paused the game to sip from his champagne-flavored Gatorade that he kept around for occasions like this: it was Drizzy Time. The game against His Airness began easily enough, with a bricked jumper on Jordan’s part, which Drake parlayed into an easy layup. They were playing make-it-take-it, so Drake got the ball again. Hell yeah.

Drizzy Time ended more quickly than Drake had hoped. In fact, Drizzy Time lasted about 30 seconds. Shortly after his first point, Michael Jordan stole the ball from him and went on a 10-0 scoring run. Drake missed Drizzy Time.

Michael Jordan is so good, Drake thought to himself as he turned the volume up on “Thank Me Later.” Michael Jordan kept blocking his shots. Why did I not have them make me taller? If Drake had been Magic Johnson’s height, this would be cake. Drake had to be real. It was basically his thing. Who else was going to document what it’s like to hang out with Rick Ross and Lil Wayne, and publicly worry about what effects leeching around strip clubs every night was going to have on his interpersonal relationships? Certainly not Rick Ross. Drake secretly thought that Rick Ross was kind of a dick.

“Light Up” was on. Drake kind of hated that song. Jay-Z was on that song. He sounded like his dad. “Drake,” Jay-Z rapped. “Here’s how they’re gonna come at you. With silly rap feuds designed to distract you.” Except that wasn’t how they were coming at him right now. They’d dispatched a digital Michael Jordan to break him down. And from where he was sitting in his beanbag chair, it was working.

Onscreen, Michael Jordan drained yet another jump shot. Drake felt like he was going crazy. Even though the game had programmed him to do it, Drake genuinely resented that his avatar was getting Jordan’s rebound and trotting dutifully back to the key like he was some sort of beta male.

Drake finally managed to score another point, blowing by Jordan for another easy layup. Probably got distracted by some change on the ground, Drake thought as he picked up his Gatorade from a stack of Details magazines.

The score was 19-2. The odds were basically insurmountable, but Drake always stuck it out even when he knew he was losing. The song “Marvin’s Room” was now playing. “I’m just saying you can do better,” Drake heard himself sing as Jordan sank one last shot from beyond the arc to end yet another game, the same way so many of their matches had ended. In Drake’s utter defeat.

“But what if I can’t?” Drake said to the darkness, choking back tears. “What if I just can’t?”