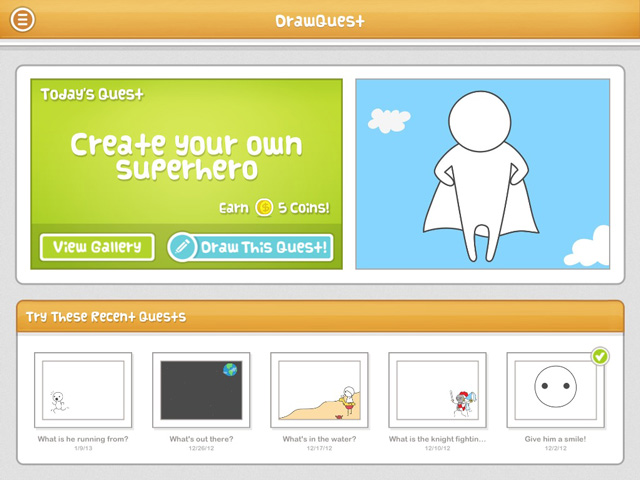 If anyone knows the secret to building a vibrant and unpredictable community, it must be Christopher Poole. He founded 4chan, a breeding ground for lively discussion, animated GIFS, and political coups that provided a simple, organized way to harness the best and worst of the internet simultaneously.

Poole is now the CEO of Canvas, a start-up that encourages users to share and riff on posted images as a form of communal discourse. Call it Memes With Friends. Not wishing to be bound to the web, the team developed an app called DrawQuest, a “free drawing community” with daily challenges and sharable galleries.

Somewhere, Zynga’s already on the phone.

Last year I reviewed the instant craze Draw Something by OMGPOP, a company that almost immediately was bought up by Zynga, hoping to add the drawing game to their stable of addictions. Something was like long-distance Pictionary; a partner on the other side of their phone or tablet would watch your illustration recreated in real-time, all the while trying to guess what in tarnation you were drawing.

DrawQuest is more like a grade-school art class with thousands of students and a very patient, encouraging teacher. Each day you are given a suggestion to draw, at times with part of the picture already started. It’s up to you to fill in the blanks and put your spin on the initial idea. “What is he running from?” one quest says, a cartoon stick person mid-stride. A picky eater might draw a sentient brocolli; a harried teen scribbles their looming SAT exam. An aging Quest’er with a touch for gallows humor might draw Death himself.

Save your picture and it automatically is posted in the community gallery for that quest. This goes a long way toward righting a main issue I had with Draw Something, which was its transience. In its initial release there was no way to save your creation. Also, your enjoyment stemmed largely from the skill and wit of your friends or randomly matched-up guessers.

DrawQuest immediately gives you access to the talented many with a penchant for touch-screen illustration. It’s a refreshing change of pace from Poole’s other, more famous creation, 4chan, which feels locked off to users unfamiliar with the chaotic assemblage of letters and posts, spilling out one after the other.

This is very much a purposeful move by Poole. He knows there’s a sea change already under way in how and where people interact, from Kindergarten to the retirement home. With Canvas and DrawQuest, Poole, also known by his online handle ‘moot,’ is hoping his work will be anything but.