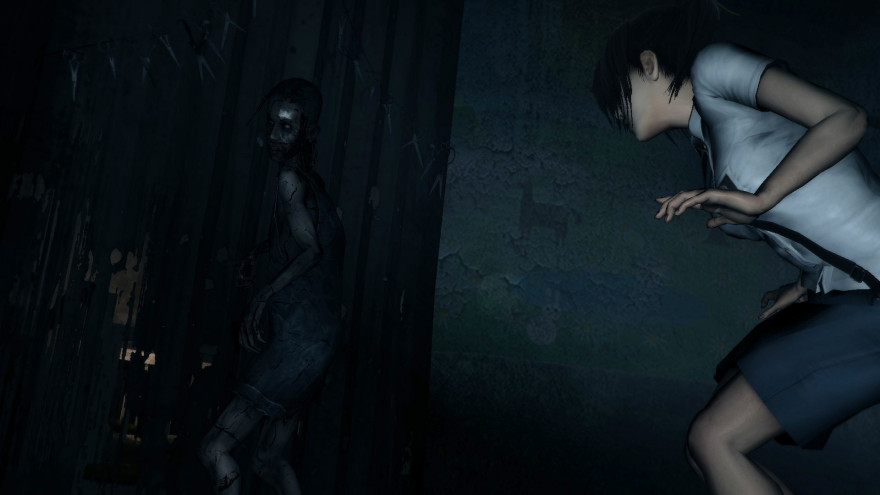 I’m on my third, fourth, fifth time fighting the overprotective “mom” ghost who snips her scissors in my face, and I’m holding down the sprint key, literally counting the seconds it’s taking me to escape from limbo. This time it’s nearly two minutes. “You might want to consider switching to casual gaming,” the game tells me.

Less than a minute ago, after rebooting DreadOut, it kindly mentioned that I’ve been playing for a while and that maybe I should take a break. (Did that already.) I’m having a hard time taking its concern seriously. This isn’t the compassionate voice of Nintendo calling to me from the abyss.

I’m aware that this Indonesian game is an obvious callback to the old-school days of survival horror—to Fatal Frame in particular. You play as Linda, who’s traveling with her fellow students to a school that, surprise, is squat in the middle of a ghost town across a condemned bridge. Night falls, you get separated from your group, and all you have to defend yourself is a smartphone with a built-in camera and flashlight. Isn’t that the theme lately. (Thank you Outlast, Daylight, Silent Hill: Shattered Memories, and Hollywood.)

The Fatal Frame games, too, drew from the established well of horror tropes, in particular millennial Japanese horror cinema. You fended off specters with a snap of a camera—only fighting them was total bullshit. Fatal Frame often stuck you in restrictive environments with clunky controls, disadvantages that don’t apply to its ghosts, who can disappear and reappear at will.

Now, bullshit is not a foreign concept to the survival-horror genre, which is all too glad to disable the player with unwieldy controls, obscure puzzle solutions (the light bulbs in a can from Silent Hill 2 is my personal favorite), and limited ammunition against hordes of monsters. It’s probably why survival-horror games are so short—our ability to endure such psychological torture is only so strong. The experiment that developers undertake is to see how far we can be pushed before we give in to despair—not the poetic kind that horror loves to court but the actual, turn-off-the-console kind.

Videogame players have a love affair with difficulty: Some can’t get enough of it while others note how “old-school difficulty” is just a nostalgic way of honoring the broken, poorly designed games that made us throw our Nintendo controllers at the wall. DreadOut is one of those games that doesn’t quite get the difference.

Things had been fine for me up until the dreaded scissors ghost kept sending me back to limbo. The opening promised the lovable cheesiness of ’80s horror movies like Sleepaway Camp and Re-Animator, or the knowing, cultish wit of Deadly Premonition. Breaking the pall of depression and moodiness was suddenly a pink van full of excitable, badly scripted teenagers and a sudden sunshine burst of music, singing, “I know I love you!”

After a long hike up to the school on the other side of the bridge, on top of the hill, the mood changed again, replaced with the more traditional vibe of Asian ghosts: the jingling of bells, giant boars with grotesque human faces, and the wailing of a woman in dark hallways. Bodies hanged from the rafters, and even a harmless black cat slinked by on the upper floor. DreadOut revels in cliche, sometimes quite smartly.

With no map, I had only visual and audio cues to guide me—the clanging of keys echoing in the hallways, the shrieking of the female ghost, the snipping of scissors … and red and blue auras to alert me to nearby dangers or assets like items or notes. Solving puzzles required me to make too-careful observation of my environment and how it changed (often dramatically) through my camera screen. I found myself lost in a labyrinth of hallways and rooms with multiple exits and hidden passageways; my fear intensified as I sought escape not only from the school but from the voices and sounds that crept after me.

But that adrenaline surge from fear sort of dies when frustration settles in, searching for the solution to the puzzle you’ve been stuck on for an hour. The morbid curiosity with what’s behind the next corner isn’t fascinating anymore. The images that frighten you become what they are: moving parts in a videogame, no more than background noise to ignore.

DreadOut’s first act (available May 15) is a short affair. You’ll only spend a few hours on it. An abnormal portion of that run-time is spent in a small, walk-in closet-sized room snapping of a violent ghost who can appear from anywhere and tear you to strippings before you can even lift your camera in defense. Another large portion of that time will be spent running through a dark void to return to the world of the living—each time you visit, the journey growing just a little longer.

“Winners don’t do drugs,” the game tells me as it cycles through its scroll of finite messages for the third time as I inch my way toward the light, the way out of limbo. I can hear Linda growing tired, her breathing laborious. Soon I’ll have to slow her to a walk so she doesn’t deplete her stamina, the length of which I can only guess at.