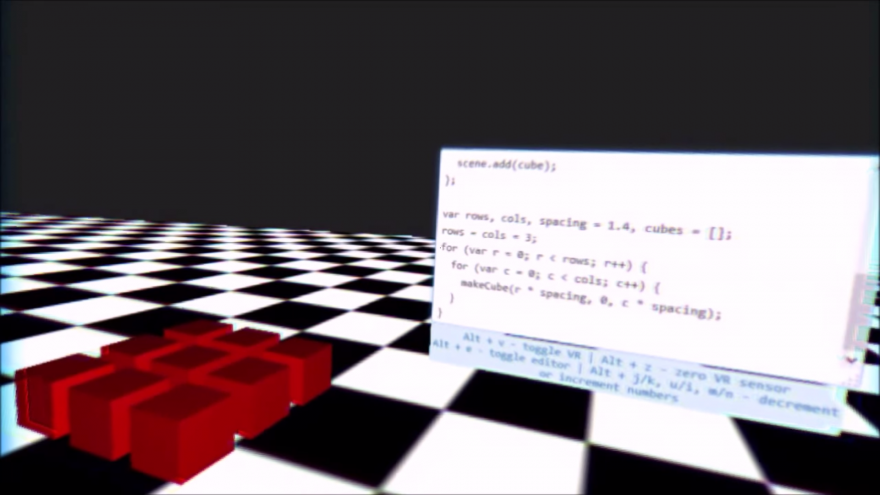 In William Gibson’s future-Chandler riff Neuromancer, protagonist Case is really good at hacking the matrix—a “graphic representation of data abstracted from the banks of every computer in the human system.”

He, in Gibson’s linguistic gumbo of late-sixties slang and Japanophilia, is a “console cowboy.”

Wouldn’t you like to be a console cowboy, too? Lately, a few games have let you peek under the hood and tinker about: Double Fine’s Hack ‘n’ Slash exposes the game’s code as it’s running, and metafictional puzzle box The Magic Circle allows you to pull at the seams of its ostensible reality. Blendo’s upcoming ode-to-hacking Quadrilateral Cowboy aims to put you squarely in the “twentieth-century cyberpunk” mood.

But Toronto-based developer Brian Peiris has come up with a way to code in virtual reality, live, as your creation forms right there out of the digital ether. See for yourself:

“Initially this was just an experiment,” Peiris said. He put it together just to see if it was possible, inspired by a rather vivid sense of purpose. “Having a direct and immediate connection to your creation is a powerful experience,” he said. “Consider that most programmers are secretly on a power-trip: The ability to code gives us control of a billion transistors on a machine performing billions of operations per second, connected to a network of billions of other such machines. Our incantations command this machinery in the most direct way possible.”

Peiris’ method isn’t exactly streamlined yet: it took an Oculus Rift and three separate programs to pull together. Yet it’s surprising no one’s done this before. Short of plugging a cable into a skull socket this is the closest we’ve come to a matrix, and if Peiris can sort the details there will soon be collaborative multi-user support, bringing us one step closer to the past’s vision of the future (if you can code, of course).

And, to be honest, Peiris sounds like a bit of an evangelist himself: “Summoning a single polygon is as easy as summoning a thousand. Each one under your direct command. That is an inspiring notion.”