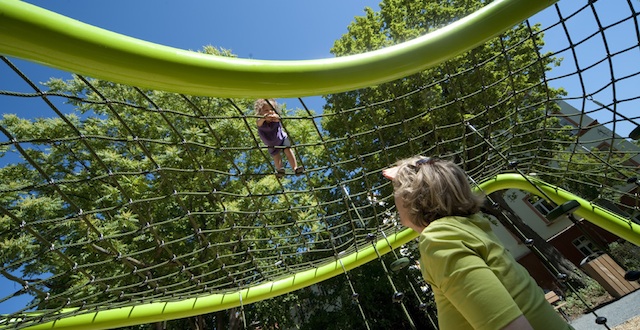 Moritz Schloten is the cofounder of the Berlin landscape architecture firm ANNABAU. Last month ANNABAU opened its first playground in central Wiesbaden, where the playground is part of a larger effort to revitalize the town’s historic core. We talked to Schloten about his childhood aversion to playgrounds, his firm’s recent experiment in play, and a Leland truck that now sits on the bottom of the Baltic Sea.

Tell us about the Schulberg Playground. How did the project start?

This was actually a very long process. First there was a competition that we that we won in 2009 for this playground … actually it’s more than a playground. It’s more of a town square of the city, of which a playground is the central part. So we won the competition for the concept of a whole square. But the playground, or the big loop as we call it, is really in the middle of everything that is going on in the square. It’s an amazing place, because the loop overlooks the city, so it is possible to see the entire city of Wiesbaden from the object.

And the site serves as much more than just a playground. It’s more really like a public gathering place, where in the evening people come in from the surrounding neighborhoods. The loop itself is in a neighborhood that is home to a lot of immigrants who have come from all over the world. And in the evenings when you come to the square, all the benches that surround the loop are completely full of people from different places. From Asia, South America, Germany—the square is often a very mixed place.

And it is great because you see everyone trying to climb and discover new things in the playground. Well, I think that it’s not really a playground at all. It’s more like a play sculpture. More like an experiment in play.

There was the opening four weeks ago, and it has been an amazing success actually. There are still some small things that we still have to do, but so far people love it.

Can you describe the loop for us?

The basic idea was to create a kind of endless play, which is why we have the idea of this main loop. The sculpture has these two giant metal pipes that go up and down, and curving back and forth in space. But [the pipes] are also kind of continuing—always continuing and returning to themselves. Between the pipes we have attached some play nets that let you climb on top, or hang underneath, or so on. And if you like you can go round and around and around the whole thing without touching the ground. And within this play net we have created these different—if you compare with computer games—levels. For example, there is a big tunnel that you can go through; and we also have these what we call liane—dangling climbing structures, and so on. So, you can find different places to play inside the big net, but the big net itself is also part of the game.

What was your favorite playground growing up?

Actually, when I was little I never really ever played on playgrounds. I never went to them, because as a kid I felt that they were really quite boring places—both visually and functionally. So that though was stuck in my mind when we designed the loop. We always wanted to design something that—both construction-wise and sculpture-wise—was really aesthetically stunning and amazing. So our design was not only to create spaces for playing, like swinging with the swings or climbing in the net. It was also more about creating an atmosphere than finding particular objects to play on. About creating an architectural monument, or object that is first and foremost interesting for itself. The colors and the curves of the sculpture form this amazing span that goes for more than 60 meters.

So that was one big interest, to create some really outstanding objects that would help frame the town square. And at the same time, we were thinking about how people could play with, and within, the object. The object itself, the quality of the object—that it was something that people have never seen before was also a big part of the game.

What would you say is the inspiration for this park?

In Germany, there are maybe some nice playgrounds, if you think about technique and visual aesthetics. But they are really always kind of the same from the conceptual side. You have the same areas that are segmented off, and each area different types of play are happening—and you know when you come there, more or less, you know pretty much already what you have to do to play there. And we wanted to create a place here that is absolutely different. Where you have something that is completely unexpected, and that is provoking you to act—to try something new.

What was your favorite toy growing up?

I don’t remember so well any more, but I think it was, when I was quite young, it was a matchbox metal truck from this really old period. It was made from aluminum and some other metals. I think it was an American truck? Actually, no. No, it was a British truck. A Leyland. And as far as I know this company doesn’t exist any more.

Do you still have it?

No; actually it fell from a ferry boat and sank on the ground of the Baltic. It was a very dramatic and traumatic end to the toy. It is still there I think. Between the fish and the Baltic Sea.

What kinds of reactions have you had to the playground?

First, there are the kids. They are really happy because for them, anything that big and bright will be really cool! But it is also—relatively speaking—a really high thing for them to climb. And so they have to find courage—I’ve seen some of them daring each other—to climb up to the heights, and to go up to their limits and to their physical borders. So they are absolutely delighted. And they are doing more than we expected with all the things. They are always trying to find new ways to climb the structures and explore the space. When we were there [at the square] for the opening, all of the kids we saw were completely happy. They were telling us, “This is the coolest place in the town.”

And there are also the parents, who actually are really happy. They are seeing it more from the perspective of a connection to the city. They are really happy to see that this part of this city—this part that is part of the city center, but that has been a bit neglected for the last couple decades. So they are really happy to see this renewed part of their quarter because they are seeing it as a new social place, a meeting point. There is a kind of boulevard around it, and the benches—they sit and watch the kids play. And also sometimes in the net you see in the some old people, you see some men climbing the net, and their girlfriends are standing there, looking afraid and saying, “you can’t do that—you aren’t young anymore!”

Is designing more playgrounds something that you guys would like to continue to do?

Absolutely, yes. It was a really very nice and enjoyable experience. But at the same time you need a client who is winning to go through this with you, because in the end, with the competition in 2009, it took one and a half years to go through everything. But also the construction itself took nearly half a year because the steel construction technique and technology was actually something new and had to be developed, and it meant we had to find a company who was doing these steel works—so it was something that could not be done instantly. We could not go to a big playground factory and tell them “Here, we want this and this and this,” and then in three months they had to be finished. So it’s not easy to find a client who wants to go through that process with you. It is a lot easier with playground design to order a swing set than it is to come up with something new that children can interact with.

It comes also, usually, with something that comes after the fact. There is a series of buildings or something, and then they say, “Oh yeah, now we need a playground before we open the living quarters.” But here it was something different. It was the idea of the city that they wanted something more than the usual. And we hope that some other cities dare to do more things like this.