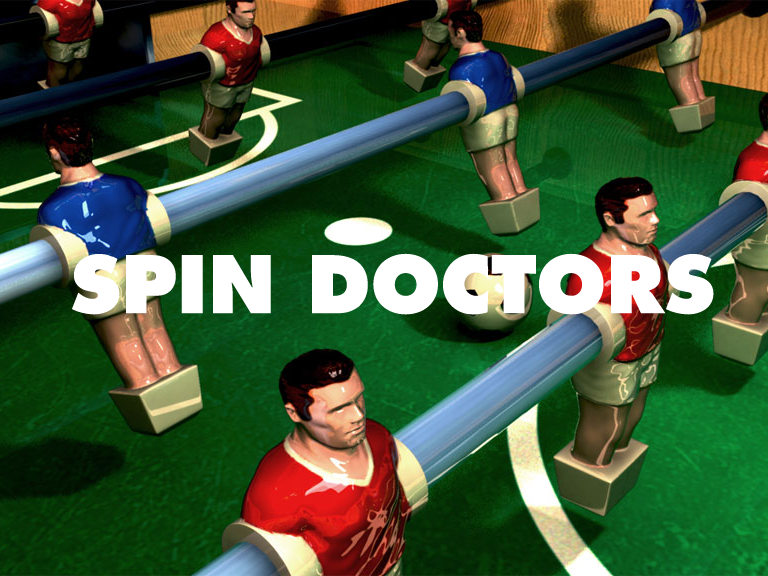 Stateside, a good game of foosball can be hard to come by. If you manage to find a table, it’ll probably be tucked in the corner of a dive bar, in a sad state of disuse, the miniature wooden ballers suspended at diagonal angles, the football lost. The only footzy action I’ve witnessed so far this year was the other night between a mom and her kid who was barely old enough to reach the handles. They were imagining playing.

That was until I came across Pro Foosball, the Pan-Arabian developed virtual foosball game (to be released for PlayStation Network in April in North America), on display in San Francisco at a pre-GDC meet-and-greet on the second floor of Temple Night Club. It drew a crowd because a foosball videogame is novel, because every other booth was overtly business-oriented, and because it’s a motion game, so people looked genuinely ridiculous standing there twisting two glowing wands. Virtual foosball neophytes tended to knock the ball backward into their own net, which, according to my childhood memories of learning the wooden table, means it gets foosball right.

“The mistakes you tend to make on a foosball table are the same ones you’ll do in the game,” the game’s creative director Candide Kirk tells me, “like trying to line up your foosmen and missing the ball completely.” She figured this out secondhand. Though everyone else at the Quirkat office in Jordan have been engaged in intense rivalries on the company table during development, Candide doesn’t play foosball herself. But she is a huge football fan, and though she’s Jordanian-English, sides with the English. Her favorite baller is the up-and-coming center midfielder Jack Wilshere. “I’m biased,” she teases.

Excessive spinning is a no-no.

Because Pro Foosball is a videogame, it has some tactical advantages over tables, allowing Candide to flaunt her football fandom. As in football, the little men can align in different formations, which is “something you obviously can never do on a real table, because everything’s bolted in,” she says. “You’d have to take apart the table.” In Pro Foosball there are formations of 4-4-2, (that’s two attackers, four midfielders, and four in defense) and 5-3-2, or you can beef up the defense, use a full-on attack, or go with a lone striker.

That doesn’t mean traditional table soccer went ignored. In her quest to represent foosball realistically, Candide was inspired by foosball tables in action around the world, where it turns out they get far more play than in my small corner of it. She stumbled upon a table sitting on the beach in Singapore, and came across coin-ops in London where rowdy blokes were queuing to play. Candide took notes. “People who aren’t pros will keep spinning the bar, and the professionals get really frustrated,” she says. So, the team added fouls. Excessive spinning is a no-no, as is shaking the table, and holding the ball without passing it forward. Well, there goes my game plan.

Still, Pro Foosball is more notable for its differences, and the most enduring change it makes is cosmetic. “We looked around the office one day,” says Candide, “and realized eighty percent of us were women.” While the pieces in foosball are traditionally male, that didn’t fly with nearly an all-female development team. She couldn’t make a game where her gender was underrepresented. “We have four teams of all women foos-people,” she said, laughing.