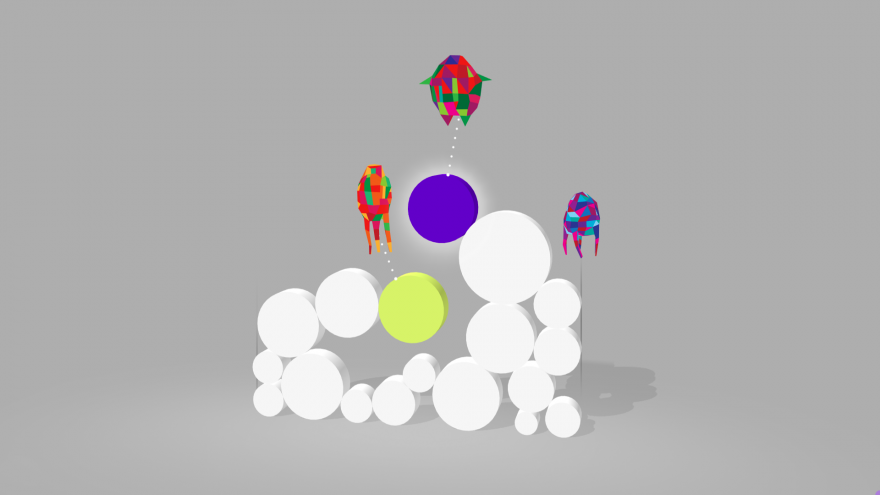 Take your fingers out your (p)lugholes and listen up: Etter Studio has let the world know that its “collaborative physics conundrum” Dreii will be drifting onto Steam (for PC), iOS, and Android on February 2nd. This is fab news.

To explain, Dreii is the new version of Etter’s European Design Award-winning co-op puzzler Drei (2014). The immediate difference between these two versions of the same game is that Drei is only available for iOS (on the App Store) while Dreii is also heading to Android, PC, PlayStation 4, PlayStation Vita, and Wii U. It will allow for people to play together regardless of whether they’re on PC, console, or mobile. And yes, there are dates for those other platforms too: PlayStation gets it on February 9th, Wii U on March 8th. But that’s not all. Dreii also has faster physics than its predecessor, brand new levels, and a new addition to its cast of quietly floating characters.

these three people are always brought together as strangers

If you recognize the Etter Studio name, but not from Drei, then perhaps it’s due to last year’s orifice-stuffing interactive short Plug & Play. Drei is the game that Etter made before Plug & Play but you can see across both a shared visual etiquette. Each use animated characters in a monotone environment, drawing attention to the small action at the center of the screen; between actor and prop. In fact, both games do have a stage-like quality to them. But where Plug & Play seems more aligned with European arthouse cinema of the 20th century, Drei (and, indeed, Dreii) are informed by wordless multiplayer experiences such as the seminal thatgamecompany’s Journey (2012).

Drei, presumably, refers to the German word for three. Three being the number of online players that can be brought together in a single game. The idea is for them to work together to stack up objects to reach a certain height. These objects are typically awkward: lots of strange angles, curved surfaces, owing to unstoppable calamity without a moment’s warning. It’s due to the near-impossible stability of these towers that you need three people to succeed through the levels, hoisting objects with their collective tethers. But what makes Drei special is that these three people are always brought together as strangers and are barely able to communicate with each other, so that they also leave the experience as strangers too.

In place of Journey‘s singing, Dreii has a wheel of words that you can select from to nudge your collaborators. Well, one-note expressions, really: “Sorry,” “Slowly,” “Yay,” among others that will be available across 19 different languages. These words are handy to use on occasion but allow enough room so that Dreii becomes a game of doing rather than saying. Gesturing through the movements of your flying character becomes the dominant way to interact with the objects and the other two people. You demonstrate, encourage, suggest.

This creates a culture of helping each other out through action. You see another player struggling with a task and feel obliged to help out. Or, if you see their thinking is wrong, you want to move in and show them how else it could be done. Disagreeing or arguing takes too much work or is not even possible to bring to the fore in such an abstracted language. It’s what made Journey work so well, why people felt so connected by the end of it all, and why Dreii should play host to a positive-feeling space of both determination and cooperation.

You can find out more about Dreii on its website.