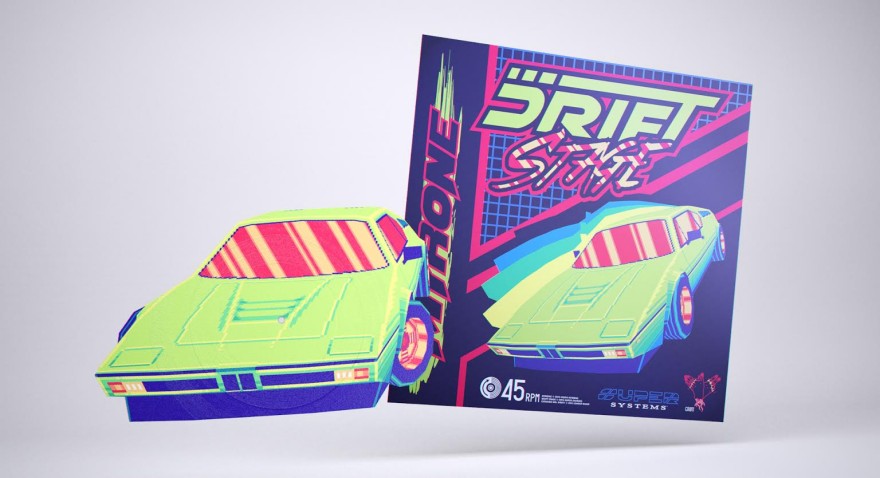 When Patrick McDermott of LA-based label Ghost Ramp first told me that two tracks from Drift Stage‘s soundtrack would be available on a car-shaped vinyl I didn’t fully grasp the idea. It’s to be a “shaped picture disc 7″ that’s the shape of one of the race cars from the game,” he said to me eagerly. Cool, I thought. That was it. I thought it was cool. But then I saw it and I realized the full implication of what he had originally told me. You can see the vinyl and its cover pictured above.

Yes, we’re talking about a vinyl that’s shaped like a race car. I know I’m repeating myself here but this is what it took for me to get my head around it. It’s not a circle shape as you’d typically expect of a vinyl disc. This one has corners. And it’s a car. A pixelly car with a lime-green bonnet and a tinted, dusk-red windscreen. Are those gold rims? I think they are. The most entertainment I’ve got out of this idea is to imagine placing the car-shaped disc in a record player and letting it spin. Would it even work? Would the needle fail to adapt to the disc’s rigid shape? I’m enjoying the suspense of not knowing the answer to that (I presume it will).

captures the energy of the game soundtracks during that era

The person responsible for the design of the vinyl, as well as its art work, is Charles Blanchard. “Why did we make it shaped like the car?” he asks himself. “To be honest, it’s only because we couldn’t make the vinyl an actual matchbox car that you can play on your record player.” Holy shit. Someone please make a vinyl that has a little race track in the grooves that you can let a toy car whiz around on while the record plays. Is this going too far?

Alright, let’s tone it down, I’ll put the six-year-old me back in his box. The reason for Drift Stage having this special vinyl disc is something that the musician, Hugh Myrone, neatly sums up. “Both Drift Stage the game as well as the music are modern takes on retro ideas,” he reasons, “so what better way to release the music than a crazy picture shaped vinyl?”. He’s right. If you don’t know, Drift Stage is a throwback to the arcade racers of the 1990s, which had none of the simulation-heavy focus of many racing games today, focusing instead (and purely) on speed, sunshine, and screeching tires. Myrone’s music, too, captures the energy of the game soundtracks during that era: loud, smiling pop-rock guitar riffs meant to be played on stage with big gestures and big hair, as well as deep, bouncy synth lines that cut through a night time drive illuminated by the commercial lights of a city.

True enough, this retro-modern rehash  is exactly what designer Blanchard saw in Drift Stage and its soundtrack; the old is new once again. Hence, releasing a vinyl now, when its most dominant years are now decades in the past, seemed an appropriate gesture. This idea extended to the vinyl’s art work, as Blanchard explains: “The original idea I had [for the art] was to make it resemble a RGB title screen, or a really old website on a CRT,” he says. Hence, it does.

The Drift Stage vinyl soundtrack is ready to pre-order right now. It should be ready to ship in mid-January 2016. “This 7″ is a lead up to a release of the entire OST on double LP vinyl,” adds McDermott, who clarifies that the full soundtrack will be out alongside the finished game. Plus, this is to be only the first game OST vinyl release for Ghost Ramp, as next the label will be turning its attention the soundtracks of Crypt of the NecroDancer and LISA the RPG.