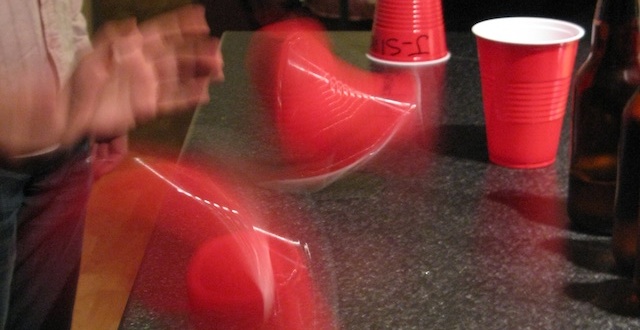 
Number of players: Eight (optimal). Any even amount of players can work—the game scales past six pretty well.

Flip Cup is almost the perfect game. It already requires teamwork and skill, and does a good job of getting you drunk whether you win or lose (an important part of any drinking game). So I decided to put an emphasis on different skills for different team members in a modification of the game that I am calling Angry Minority Flip Cup.

1. Split into teams of two. Line up across from each other on a table. Make sure the two people going first are facing each other, then the people going second, and so on. Each person needs an empty party cup in front of them.

2. Fill the cups in front of each player. The first person should get one-fourth a beer (or other drink of choice). The second person, half a beer. The third gets three-fourths. The last person gets a full beer. If you have more or fewer players, evenly spread out the amount of beer each person gets, so that each player has more beer than the last, with the final person—the anchor—having a full beer.

3. All players must have their hands on the table until it is their turn to go. When a neutral third party tells everyone to begin, the first member of each team must pick up their cup and chug the contents. Once the player has completed chugging, they must place their cup right-side-up at the edge of the table so that a little bit of the cup is hanging over the edge. Then, they must flip the cup upwards by hitting the underside of the cup with their finger, in an attempt to get the cup to land safely on the table facedown. If they fail (the cup lands sideways or right-side-up), they must attempt to flip again, repeating the process until they are successful.

4. The next person cannot touch their cup or begin drinking until the person before them has finished chugging and successfully flipping. Once that happens, they must chug their beer. Once they complete that, players 1 and 2 must both get ready to flip simultaneously. If both cups land down, the next person can go. If neither lands down, they must both flip again at the same time. If one of the cups lands down and the other doesn’t, only the person who unsuccessfully flipped must continue to flip.

5. This continues with each player needing to synchronize flips with all the players before him. This means the first player will have to have completed four successful flips in order to win. This puts an emphasis on different skills. Your early players need to be the best flippers but not the best drinkers, as they have less beer to drink. Your last players need to be great drinkers, but their flipping skills are less important, as they only have to flip once or twice.

6. The winning team is the first team whose players successfully finish chugging and flip their cups. They must then all high-five and taunt the other team. The losing team must go find more beer for the next round.

Professional rule variant: If you feel you are highly skilled, you can play the pro rules. This means that when you are flipping with other teammates, you not only have to flip at the same time, but your cups all have to land facedown on the same go. So if players 1, 2, and 3 are all flipping and only players 2 and 3’s cups land facedown, then instead of only requiring player 1 to continue to flip before player 4 can start, all three players must try again until all their cups land facedown on the same turn.

Drinking Games is a column in which we ask game designers to design new drinking games. Manveer Heir is a senior designer at BioWare Montréal. Cheers!