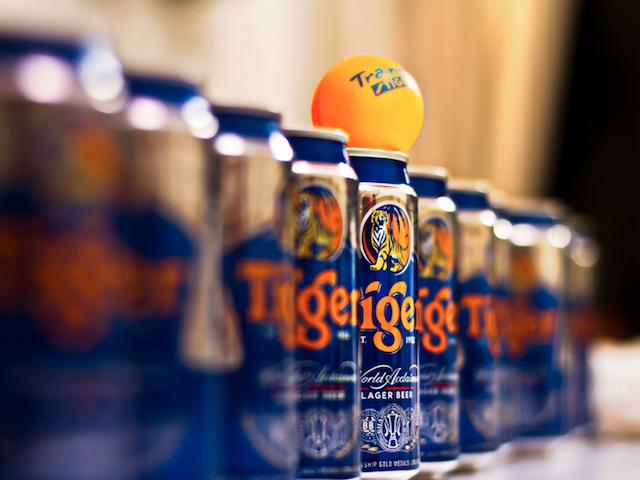 After seeing this brilliant arcade cabinet that pours the winner a pint of pilsner, I’m suddenly optimistic about the future of drinking games. Called the Barcade, the machine was made by an ad agency to promote Big Boss Brewing Company of Raleigh, North Carolina’s sweet carbonated golden brews. It runs a fighting game called The Last Barfighter, which lets buzzed craft beer fans brawl it out, using mascots for the company.

The Last Barfighter is no Street Fighter, or even Pit-Fighter, but it’s a Nobel prize-worthy idea that’s proved to me that we might just need to rethink drinking games. In too many drinking games, alcohol is considered a negative factor. Ring a cup with a pingpong ball, the other team has to drink. Draw a deuce, and you can make your girlfriend take a shot. Forget your Smirnoff Ice in your other jacket, and you’ll live to regret it. This is borderline hazing, but it’s also nonsensical.

My general problem with the drinking game is the people who suck at them are the ones who are forced to drink, and the winners are left stranded in anxiety-ridden sobriety. Shouldn’t it be the other way around? A shot of Patron should be a reward, not a losing condition.

Luckily, liver damage and multiplayer go together like hops and malt. All we have to do to ring in this brave new world of incredibly positive drinking games is replace Barfighter with a better brawler. Easily, my vote would go to Super Smash Bros. because there are few things more satisfying than throwing back a few brewskis and punting your bud’s Jigglypuff 900 yards with a yoyo.

Smash Bros. would benefit greatly because this would improve the disproportionate drinking to pwning ratio. The game moves at a maniacal clip. You can get a swig or two in during the character-select screen, but that’s about it. My group of friends were all extremely enthusiastic about throwing down, but, being in our early twenties, we were equally enthused about boozing. This caused a conflict of interests. While the winner played on and sobered up, the person who got knocked out first would have a few minutes to rest his eyes and leisurely sip on a High Life. (Hey, we were broke!)

This is not how losing is supposed to work.

But putting Smash Bros. in the Barcade cabinet would solve everything. A glass of beer is poured. Then, the losers bitterly stand there and watch the winner drink. That sounds promising.

To the victor goes the spoils, I say.