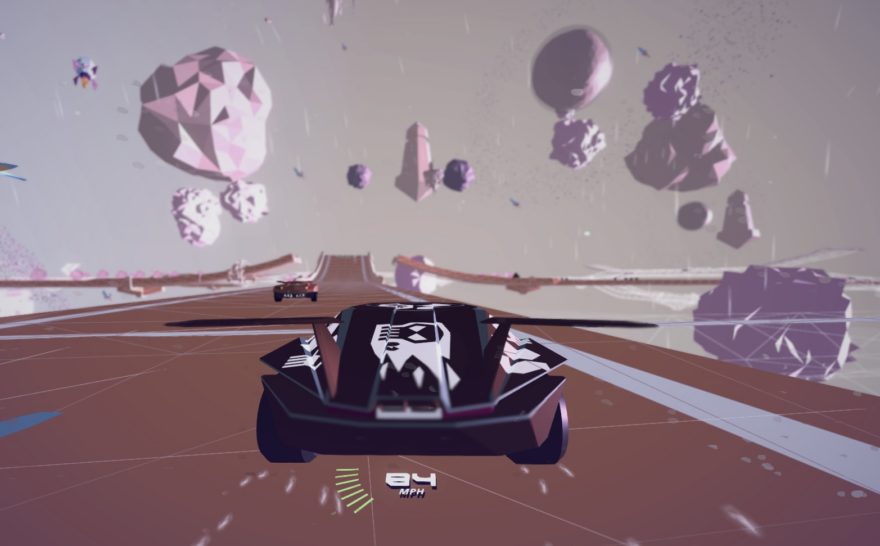 I don’t drive in real life. I can’t face it, the idea of having to pay that much attention to anything makes me anxious. The same is true of racing games: Forza, Gran Turismo, Burnout all get me a little nervous as they approach top speed.

Drive! Drive! Drive! takes my anxiety and multiplies it tenfold. You see, you’re not just racing around one track—keeping the best line and drifting around corners to recharge your boost bar—you’re racing around several tracks at once. Each separate track has a car for you to control, so you have to jump between them to try and find the best racing lines on each different track. When you’re not controlling a car, it’s driven by an AI, meaning you have to check in with each track regularly to keep pole position.

Each neon-traced track comes apart as you cross its finishing line, giving you one less race to worry about. The game coyly admits its AI isn’t so great in its opening tutorial, but this counts not just for your opponents, but for when it’s controlling your car too.

This poor AI actually works in the game’s favor—the fact your own vehicle traces its way around the track like a safety car when you’re not in control means you have to jump between tracks often, fighting your way back to the front of the pack. It’s a game of spinning plates, except the plates in this case have four wheels and an engine.

The skirmish for first place is the most exciting part about racing games and this is why so many of them adopted rubber-banding; the process where AI opponents would get faster the further they are behind you. Drive! Drive! Drive!‘s solution is much more complicated, but it proves compelling: you’re perpetually fighting for first place, your only reward for finding the best route being to find another.

Driving aggressively is key here, the barriers of the tracks cut into the sky are nearly non-existent, and a good shunt can send enemies careening off of the road and into the the void. You’ll merrily drift around corners to refill your boost bar, and crash your way through anyone in your way.

If I have one concern from my initial playthrough it’s that the premise could get a little flimsy. I’m unsure as to how long something so frantic can hold up. But, if you love racing games—a genre that, if i’m honest, I can’t usually stomach—you might have found an arcade game that scratches that need (for speed). It’s a racing game played from the perspective of a television editor, switching between the various monitors to let you focus on the most exciting bits.