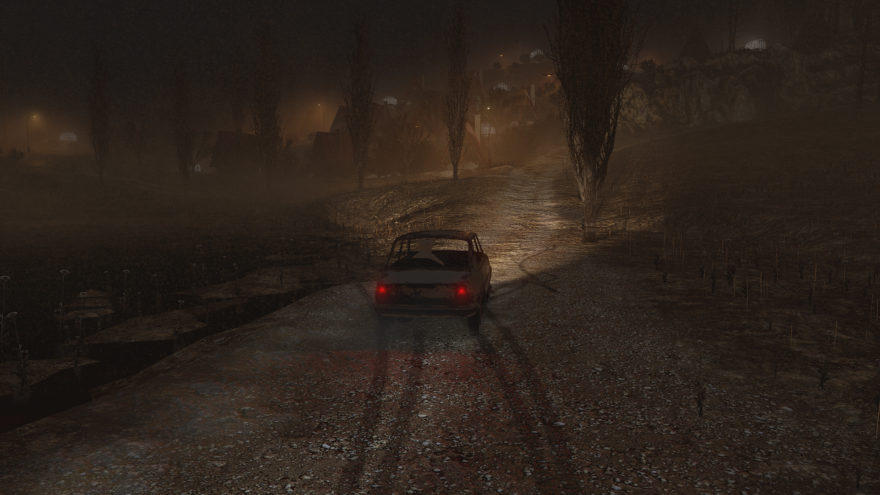 Car games are typically shiny and chrome—vehicles dedicated to portraying their brands in the best possible showroom lights. They focus almost entirely on the image of the car you see in ads: sleek and stylish, fast, an Americanized ideal of the freedom of the open road. You rarely see them the way that Ondřej Švadlena presents them in his untitled work in progress, a moody driving simulator in which you drive down dark streets pursued by oddly physicked AI foes.

The project, whose progress has been documented in a TIG Source forum, is a large-scale open world game where you drive through hostile territory. In keeping with classic car movies of the ’70s—Vanishing Point (1971) and Duel (1971) among them—you avoid pursuit from unknown entities in your quest to cross this dead land.

an ordinary kind of odd

Švadlena, who is perhaps best known for his work in animation, takes a variety of influences to craft the almost post-apocalyptic darkness in which he sets his scene: “Definitely a significant event was our escape from, at that time, totalitarian Czechoslovakia in 1984. It was an eight hour night hike across the mountains dividing Yugoslavia and Austria, where somewhere in the middle of that journey, we were above a border crossing station where soldiers with machine-guns were searching the surroundings with floodlights accompanied by the sound of barking dogs.”


The project calls to mind that influence as the player character can stare into the rear-view mirror and catch a glimpse of their pursuers, pig-like creatures that more closely resemble Sloth from the The Goonies (1985) than any actual person. There is the impression of yellowed streetlights cast through rake-thin trees onto slick asphalt, an ordinary kind of odd. It is the normalcy of the post-apocalypse, not the “He-Man with cars” Švadlena sees as the Mad Max sequels but rather the soul of the original: “the contrast between the crazy behavior of it’s inhabitants and the setting itself, which was very ‘normal’ or ‘familiar’.”

The car, both in this dead world and in Švadlena’s personal history, takes on a new meaning from the traditional auspices of car games. It is not, in this context, a glistening vehicle by which you can effortlessly drift through gleaming Milanese streets. It is instead a method of escape and survival. “At the age of six, after spending three weeks at a clandestine boy-scouts camp … when my parents came to pick me up, the first thing I wanted to do, was just to sit in our car. An orange Dacia – the same car in which we drove to Yugoslavia, later that summer, and left it near a forest before escaping on foot to Austria.”

You can find out more about Ondřej Švadlena’s project through their TIG Source forum updates.