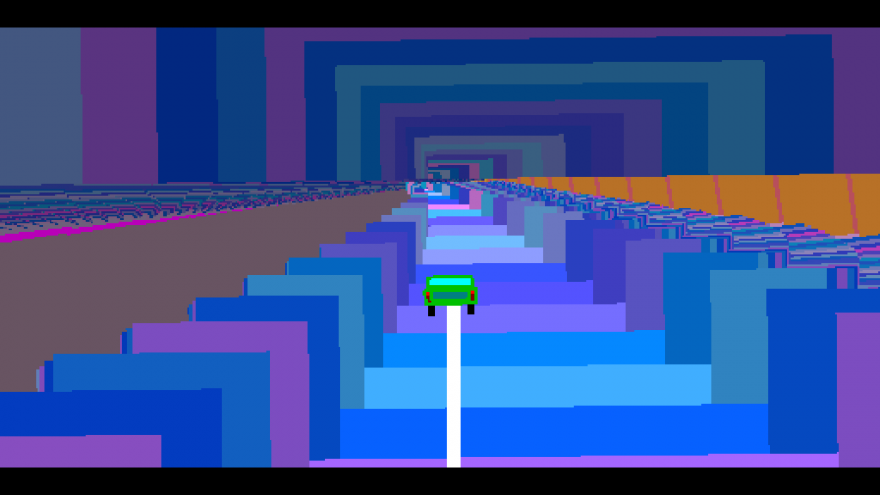 I dunno about you, but when I drive to work in the morning it’s exactly like zooming through the crazed eye of a protean god, high as shit, as they fall helplessly and perennially through some rapturously psychedelic wormhole. Yep, that’s precisely it. So when Niklas Ström rocks up with something he describes as a “great realistic game about driving to work,” and it resembles that scenario just described, I’m impressed and can’t acknowledge the accuracy of the work fast enough.

Only kidding, I don’t drive to work.

But I have done. And so I know of that glaze that sits across your skull, like a morning dew thick and stringy, screwing with your brain and weighing down on your eye lids. I know what it can do to you. In fact, years before I could drive, I had a paper round, I used to get up at half five in the morning and cycle for 20 minutes. Sometimes I fell asleep with my eyes open, still somehow watching the road as I pedaled, and it could have been up to 30 seconds before I came back round to my resentful semi-consciousness. The light always hurt my eyes when I did.

leaving only the spiraling shock of it all.

The only way I knew I had slept is because I couldn’t remember cycling past the usual sights that morning. A police station. A school. A lonesome pub. Had I even swerved around parked cars? I had, and it’d freak me out. (That’s nothing: I used to fight close friends and my parents, even managed to empty my bladder in the bathroom once, all while sleepwalking.)

The mornings, they be weird once you’ve left your bed earlier than you’d like, is all I’m saying. You become like a groggy after-drunk pleb, dropping keys, stumbling into corners. And millions of us have to drive to work like this? Blurred vision, muted sounds, an ever wavering state of somnambulism; this is what we tolerate. And so maybe it isn’t such a stretch to imagine that driving to work, with all the motor-kinetic commands it puts on us, when tired and rushed isn’t unlike Ström’s CAR ON A STICK. That is, like playing Super Hexagon with all the challenge removed, leaving only the spiraling shock of it all.

You can change the colors that flock around you in the shape of roads and barriers at the push of a number key. Rainbow blocks become brown smears or purple knives. Hit any of the QWERTYUIOP keys (which is also the sound the game will force out of you) and the road will fall away entirely or reform as some other frightening structure of sharp lines, or worse, a giant smear of repeated sprites. It’s beyond surreality. Your other option is to hit the Space bar and let it randomize before your eyes like the never-ending flicker of icons on a fruit machine.

You can also drive. The car, on its stick, can accelerate and decelerate (or, the background can, at least), and it can turn sharply to the left or right. It’s like you’ve been playing an old 2D driving game and fell into its kill screen. There is no end and you will not get to work. You can only keep driving and watch as the colors fly into your eyeballs to the appropriately ecstatic bang-bang of the music, a mesmerizing arrest falling over your body. Staring at it blank-faced for several minutes comes highly recommended.

You can download CAR ON A STICK over on itch.io.