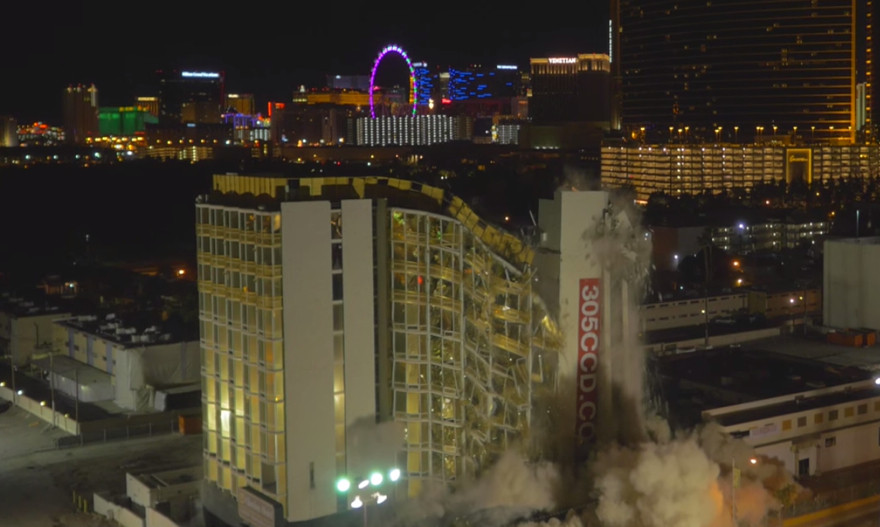 Fans of explosions have been using personal drones to film buildings undergoing controlled demolitions. These drones haven’t just been filming from high altitudes: they’ve been getting up close and personal with buildings that are not long for this world. This practice, reports Citylab’s John Metcalf, has rankled police and fire departments. For safety reasons, controlled demolitions have perimeters behind which bystanders must stand and, according to public officials, these perimeters should also apply to drones.

That’s a serious claim worth addressing. But first, let’s stipulate one fact at this early juncture: These videos, if you’ll excuse some technical terminology, are pretty damn cool.

we are spoiled by the degree of freedom afforded to virtual cameras.

Consider, for instance, a video of the failed implosion of the Clarion Hotel in Las Vegas. The drone hovers peacefully across the street from the hotel. You can see it taking off from the roof where observers have camped out. Slowly, the hotel’s floors start to give way, like expensive concrete dominos. The implosion isn’t violent. Nothing goes flying. In fact, it’s elegant, a fact emphasized by the piano rendition of Debussy’s Claire de Lune that plays in the background. This, incidentally, is the same song that Steven Soderbergh’s Ocean’s 11 closes on. Indeed, this is the ending to Ocean’s 11 that humankind deserved.

Watching drone videos, it’s hard not to be reminded of videogames. As a culture, we are spoiled by the degree of freedom afforded to virtual cameras. They hover everywhere and, because they do not exist in physical space, they cannot be obtrusive. Thus, in Battlefield 4, you can knock over a skyscraper without worrying about how that will affect cameras. There’s even a tutorial that teaches you to pull off this feat. This lack of concern for the ways debris affect cameras has allowed videogame developers to create remarkably artistic explosions. Indeed, Fallout 3 allows you to get close to a nuclear detonation, and Call of Duty: Modern Warfare 2 films the fallout of an electromagnetic pulse, a device that exists to knock out electronic devices like cameras.

That, in turn, brings us back to the physical cameras mounted on drones. They, unlike their videogame counterparts, do not exist in a consequence-free universe. Set off an electromagnetic pulse near a camera and it will die. Thus, public officials deserve a degree of sympathy when they suggest that the filmmaking style cannot readily be reproduced in the real world. But what of their specific claims?

this is about ethics in drone journalism.

Metcalf cites WFAA-TV that was told “a drone could fly in the path of a helicopter that may be flying over the scene, or that a drone could get caught in the middle of whatever it’s trying to capture, from dropping too far into a situation, or getting caught in the debris from something like an implosion.” Those last two problems are risks that appear to be risks that any drone owner would knowingly assume when filming an explosion. The first concern—that drones might cross paths with other airborne vehicles—is in no way limited to the filming of explosions. Indeed, it is one of the major questions surrounding the use of civilian drones.

Actually, then, this is about ethics in drone journalism. The low-altitude airspace in which commercial drones operate was, until recently, largely off limits. This was both a safety measure and a means of protecting citizens’ privacy. These rules are now evolving. In mid-February, the Federal Aviation Authority (FAA) introduced new guidelines that would permit the use of commercial drones so long as they stay within sight of their operator.

The use of drones for journalism, however, has not yet been officially sanctioned. The FAA, reports Poynter’s Al Tompkins, “signed an agreement to work with CNN in a test project to come up with ways that journalists can safely use drones.” In the meanwhile, the Professional Society of Drone Journalists has issued a “Code of Ethics for Drone Journalists” that builds on traditional standards of journalistic ethics while acknowledging the special challenges and risks that drones pose. This code, however, is in no way binding.

Drone footage of building implosions therefore exists in a state of flux. It is not yet fully legal but it is more so than it was a couple years ago. Similarly, it cannot yet achieve the formal audaciousness of videogame camerawork but it is headed in that direction. We might one day see real-life explosions that look straight out of Call of Duty, but technology, laws, and ethical standards have a long way to go before that is possible.