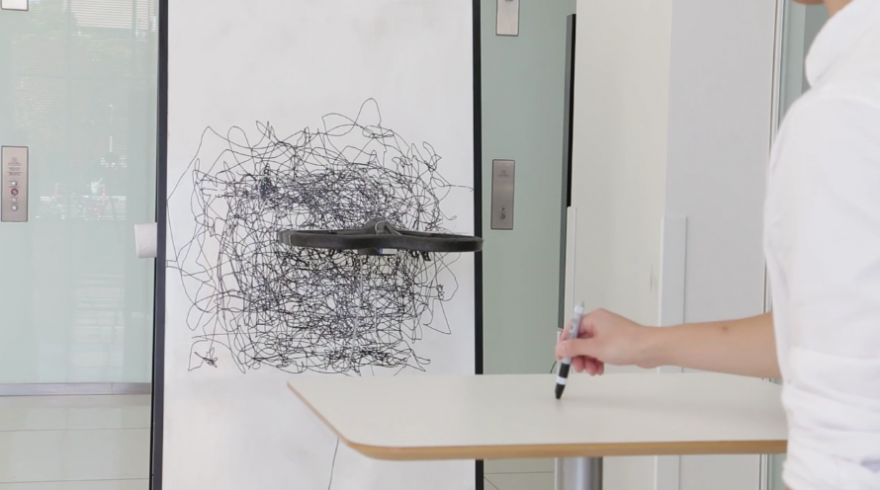 Will a robot ever be able to write a symphony? It’s a question pulled from that scene in I, Robot (2004) which, while cheesy, tugs on a line of thought that is only getting more relevant—if art is a particularly human endeavor, what happens when a robot tries to make art?

Creators Sang-won Leigh, Harshit Agrawal, and Pattie Maes from the MIT Fluid Interfaces Lab poke at an answer to that question with their project The Flying Pantograph. The gist of it is that they’ve given a drone a marker and programmed it to draw on a canvas in response to human motions with a pen. The drone is programmed with different kinds of responsiveness which in turn lead to different kinds of drawing output, from more precise motion tracking to a very loose responsiveness to guidance. What happens in result is a human-guided but distinctly robotic artistic product, a collaboration in which neither party is fully in control.


It sure is no Picasso. Heck, it’s not even Warhol. The whole exercise is a bit reminiscent of those videos where they give an elephant a paintbrush—it’s cute and endearing and a little unsettling to watch a non-human thing attempt to create some semblance of art. But ultimately we’re in on the joke—a painting by an elephant will never be real art, and the end product in both cases is not something that can really be hung in a museum. However, The Flying Pantograph is still something noteworthy by virtue of the process.

Can a robot have aesthetics?

The creators embrace the “mechanic disconnect” between human intention and drone output, seeing it not as an insurmountable fault but as part of the artistic value. They go as far to describe the drone as if it brings its own intentionality to the process. “It offers its own aesthetics created by a software algorithm and aerodynamics,” their project video explains. Can a robot have aesthetics? Either way, consider the line between artistic intentionality and haphazard circumstance thoroughly blurred.

In the end, this drone isn’t quite ready to write it’s own symphony, nor even draw without the help of a guiding human hand. But in a time when computers are increasingly responsible for creation, The Flying Pantograph calls out both the existence and the nature of the collaboration between human and machine. What happens is not quite fully machinated procedural generation and not quite manual human input, but something in between.