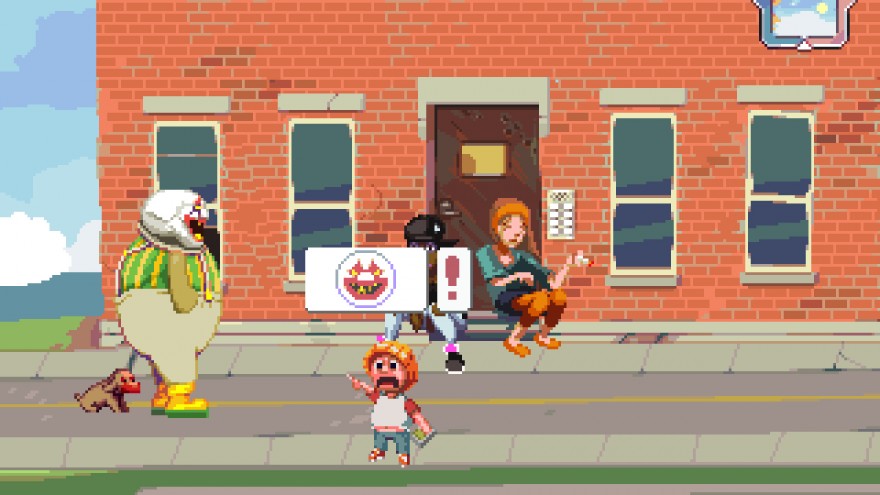 Remember Dropsy, everyone’s favorite clown/nightmare fuel? For those who don’t remember, Dropsy first began as a good joke on the Something Awful forums in 2004 and quickly spiraled into The Creepy Clown Game That Could, with over a decades worth of tumultuous development history, including: an almost-successful Kickstarter, then an overly-successful Kickstarter, before finally arriving at a publishing deal with Devolver Digital. Dropsy survived it all, his painted red smile unwavering (because it’s painted) and bulbous body #ready to do nightmarish clown stuff like hug trees.

The Little Creepy Clown Game That Could

Dropsy flourished from weird internet thing into weird videogame thing over that decade and is now described as a “non-traditional” take on the classic point-and-click adventure game. Though specific story details still prove elusive, we know the contast between Dropsy’s sunny disposition and horrible luck/homicidal appearance remain at the heart of this bizarre joke. After a tragic fire shuts down his family’s circus, Dropsy finds himself adrift in a world that misunderstands him. To fill the empty, clown-shaped hole in his life, he takes to “comforting” strangers and painting “smiley faces” on everything from trees to his dog.

Those who watched Dropsy bloom from a mutant clown baby into a bonafide videogame will be happy to hear that creator Jay Tholen announced development would finally reach its conclusion in August. Though there’s no set release date yet, he assured Kickstarter backers it’d be announced “soon.” In the meantime, Tholen continues to provide a slow drip of GIFs and feature updates to tide fans over. And the more we learn about Dropsy through said GIFs, the more we fall in love with him (though, not all of us).

A tweet from Devolver Digital, for example, showcased Dropsy’s twerking skills—skills I’d probably best describe as “severe.” While everyone’s favorite yellow-toothed clown drops down and gets his eagle on, his ever-faithful puppy companion gazes upon his owner’s ample bottom with stony-faced respect. Another update reveals that “Eughh (the cute lil’ puppy) can now take a leak on stuff. He prefers fire hydrants, or things vaguely hydrant shaped.” And if you’re rolling your eyes right now, asking yourself what some stupid virtual clown-puppy’s piss could possibly have to do with anything, Tholen also explicitly stated this feature would play an active role in the story.

One beta tester tweeted out praise for another surprisingly useful/useless feature: a dedicated fart button on the save screen, who’s sole purpose is to make tooting noises and cheer up potentially frustrated players. It’s a thematically relevant function, too, because another GIF demonstrates Dropsy “taking an adventurous dump” in a port-a-potty—a feature I’m sure will either a) be the solution to the final puzzle, or b) serve as another excuse to listen to more fart noises.

“I can’t begin to express how excited I am. sADMASkfsdmfksdmfmntyrtydfkmsl,” exclaims Tholen at the end of the Kickstarter update. “Seriously, this game is going to blow your clown shoes off.”