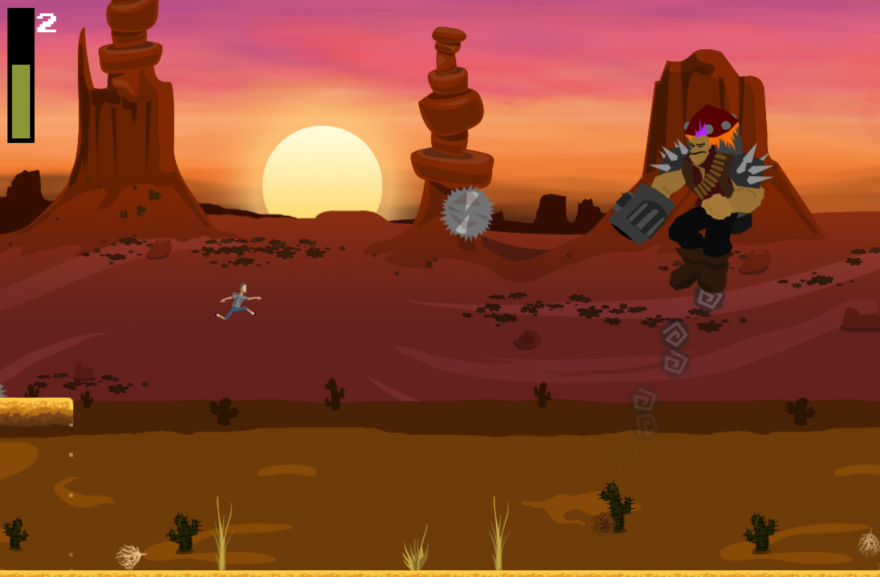 If you ever wanted to know what the fever dreams of drug policy activists look like after too many long nights working through reams of legislative proposals, try Drugbound. It’s a wildly colorful, 2D side-scrolling endless runner with a hook straight out of High Times. The game is centered around your quest for freedom and your ability to collect the most marijuana possible, while avoiding buzzsaws, rocket-riding demons and the invisible, oppressive hand of the DEA.

The first level sees you endlessly running through a sunset desert (which just happens to resemble the Mexican border), collecting herb and trying not to die. Collect enough cannabis in your runs and you can use it to buy items like the “haunted napkin”, and the “skull of Timothy Leary” and other power-ups that confer abilities you may find useful your efforts. Later stages pump the nightmare factor even higher, taking place in satanic cityscapes and messed-up graveyards.

What’s weirder, perhaps, than all of the demon-dodging and herb-collecting, is that a colleague of mine at the ACLU who works specifically in drug policy reform told me about it, a couple of months back. He saw a link somewhere and couldn’t believe it was real – but he was excited about it regardless. It was a game about drug reform starring demons. What’s not to like?

It was a game about drug reform starring demons. What’s not to like?

There’s definitely an overt policy message here, a vehement rejection of America’s drug war and the sheer glut of money spent to keep it going. The none-too-subtle racism of drug prohibition is touched on as well. Little tooltip facts and quotes about marijuana prohibition pepper every non-game screen. Remember, US law says you have the right to remain silent if you are arrested – for smoking up or for illegally hitching a ride on demon #1’s rocketship.

A little bit like Smuggle Truck (and it’s hilariously apt, Apple store-approved twin, Snuggle Truck), this is political commentary via way over-the-top satire, and so far, it actually works.  The endless runner metaphor is apt – as are the ubiquitous obstacles and frequent, untimely demises. Advocacy work, especially against entrenched cultural attitudes and behemoth government agencies, is tiring, manic, and full of crushing absurdities. The people who work in this field are tough – battle-scarred, even, from too many run-ins with the opposition, and weary of the many campaigns (really, fights) ahead. They also tend to have great senses of humor – buy a drug policy advocate a beer, and you’ll be party to a string of absurd, heartbreaking, and sometimes-hilarious stories of weirdo coalition partners, nasty legislative losses, and crazy campaign trail exploits.

Drugbound has merely literalized the experience.

The game is only in alpha, and it may well turn out to be a one-trick pony, but there is something just ridiculously appealing about running around these nightmare worlds collecting herb and reading factoids that were no doubt heavily researched and sourced by the Drug Policy Alliance or some such organization. These are the fever dreams that lie deep within the id of an activist, and man, they are fun to play.