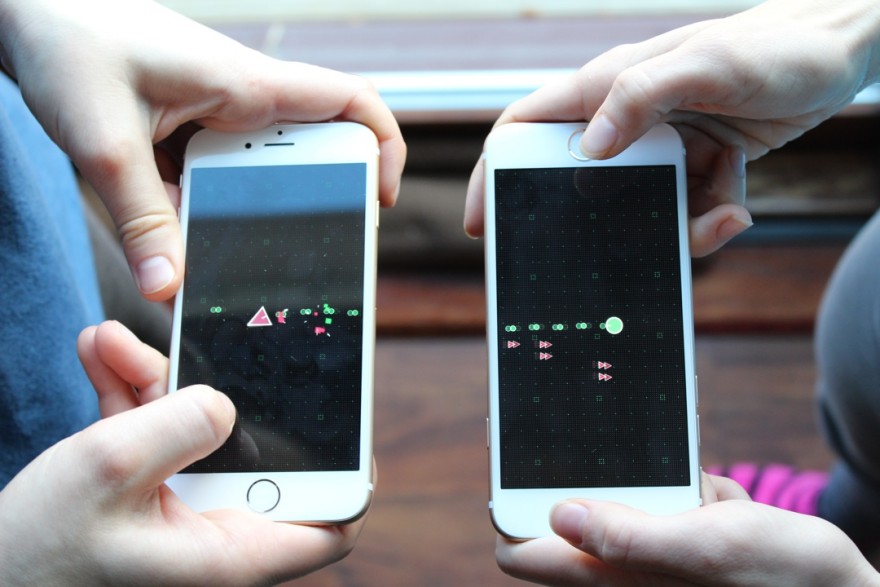 I wish I could have shown Sebastian Gosztyla’s mobile game Dual to my mother 20 years ago. Not to play it with her, she wouldn’t have allowed that, but to see how she configured it in the rules she had for me back then, when I was a child. She saw videogames as separating me from other people, as unhealthy for my social life, so an hour of playing a videogame had to be counterbalanced by playing outside with my friends for an hour (at least, during the summer).

But Dual holds weight on both sides of my mother’s perceived divide. It’s a two-player game, played with two smartphones connected by Wi-Fi or Bluetooth, that has you trading bullets across physical and digital space. You play it with someone, anywhere, and it actually brings you closer together—that much cannot be disputed. “I really wanted to create a small experience that would encourage people to use their phones to interact and connect in the real world,” Gosztyla said.

I’d like to imagine that my mum’s little system would not be able to bend around what Dual offers. Or that I could, at least, provide a decent argument during the inevitable rebuttal. But I suspect that she’d crown it a videogame like any other and disallow me to play it. Heck, who am I kidding? I wouldn’t have been allowed a smartphone at that age anyway.

Longings of the past aside, Dual is a remarkable, if simple, idea. It’s a shoot-em-up that divides the two halves of the screen space across two phones. This means that the bullets from each spaceship are shot from one phone, move invisibly through the air between both players, and then re-appear as if from another dimension in the opposite phone. Since each player has one half of the screen in their hands, as Gosztyla puts its, “[they] have some wiggle room to explore the physical space in interesting ways.” He’s right: if each player wishes to see the full screen, they need to stand close and move their hands to bridge the gap.

so close that you feel each other’s hot breath.

But you may not want to, for Dual—as the name states—is a competitive shooter. Therefore, it is in your interest to manipulate the space with your body to gain an advantage where possible. Perhaps you hide your half of the screen so your opponent has less time to react to your bullets. Or maybe you cover up their screen with one hand so they cannot see it. Here’s another idea: you decide to sit as far away as the tech will allow, facing each other, negating the closeness the game encourages in favor of a digital-age recreation of a tense Sergio Leone spaghetti western stand-off. You could even play the iconic music.

Maybe that’s going too far. And why do we always have to fight one another, huh? Well, you don’t. Dual also has a co-operative mode, and if you delve into that you’re really going to want to get so close that you feel each other’s hot breath. There will be aliens. They will descend from one half of the separated screen, and while one person dodges them the best they can, the other sends bullets across being careful to not hit their partner. The closer you get the easier blasting those gross pixels will be.

So if you’re looking for a reason to get intimate with someone, or maybe for a playful way to settle a debate, Dual should have you covered. How do like those apples, ma?

You can download Dual for free on the App Store and Google Play. It costs $1.99 to unlock the full game.