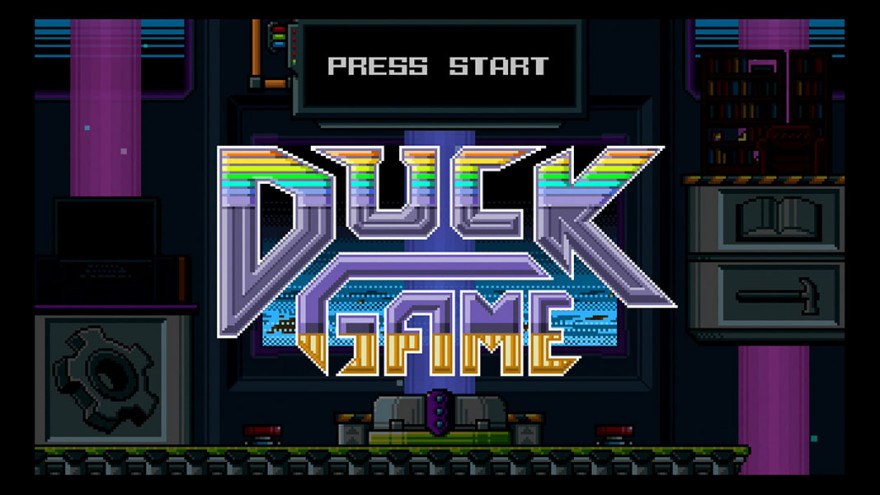 To start things off, there’s a quack button.

I’ve always had a fondness to mapping an entire, otherwise key button to an arbitrary function. The hug in A Boy & His Blob. The fart in Oddworld. It doesn’t serve a purpose, but it’s not a waste. It sets some sort of byline to the experience. Like bonding sentimentality and adolescent chuckles were important to Blob and Abe’s Odyssey, being able to quack is important to DUCK GAME. Quacking incessantly is an option given to you as part of the DUCK GAME experience. But spending 5 to 20 full seconds or indefinitely to hammer the quack button also requires certain faith that your friends won’t use that opportunity to shoot the beak off of you, a mutual understanding clipped by a mixed message that underlines the majority of DUCK GAME. Even outside of quacks.

DUCK GAME is positioned as the Ouya’s latest “killer app,” which is a passive way of saying “it’s like TowerFall.”

DUCK GAME is positioned as the Ouya’s latest “killer app,” which is a passive way of saying “it’s like TowerFall.” “Like TowerFall,” DUCK GAME is a four player one-hit arena death match, kitchen-sinked with powerups, traps and a control set that requires some mastering, quacks and all. “Like TowerFall,” you’ll find yourself submitting your own nominations for the Darwin Awards, though far more often. Unlike TowerFall, however, its aspirations to be in that family album intrude on what DUCK GAME could otherwise be.

There are so, so many ways to die in DUCK GAME. Nearly everything can deliver a final blow: blunderbusses, snipers, shotguns, golden guns, swords, tombstones, a gun that looks like a chocolate banana that pops out a hovering dread pixel. You don’t begin brandishing any weapon, so it’s always a mad flap to the nearest murder gizmo. Most have quirks about them, some a nasty kickback, some take a millennium to reload, and grenades need some practice since the fire button only pulls out the pin, but you still need to throw it with the grab. Often your kill is more determined by the battlefield than the musket.

A handful of stages have specific deadly methods in mind. While being hit by the net-gun isn’t usually fatal, a platform littered with spikes and bottomless potholes make it killer. One goofier weapon is a bible, which if read from can recruit opponents on to your team, ending the round by default. That’s really funny, but I wish I didn’t have to ask my friends to “time out” to see what the bible did in the first place. This is where DUCK GAME runs afoul. (A-fowl? No.)

One hit kills, cycle to the next stage, first to ten points. This is standard fare in the new arcade movement: it brings an energy, a kinetic, frantic fun, but DUCK GAME muddies the water by having thrown the possibilities farther than it’s worth waddling for.

Each gun delivers the same kill—funnier or more ambitious, though, it makes no difference.

Many of the stages and weaponry are elaborate. There are a few levels with treasure rooms full of fancier weapons that require unlocking, or layouts that edge on some manic experimentation. I still love the octopus-like burst of hellfire that erupts when you ignite a leaky oil drum. But those are all risks that bare no greater a reward. You can go for the mini-gun, the exceptional wide-beam laser blaster, but it’s no more or less effective than a pistol or a hammer. Each gun delivers the same kill—funnier or more ambitious, though, it makes no difference.

Here’s an example: tin-foil hats. This power-up serves only one purpose, and that’s to block the mind-control ray-gun. If no one is using that ray-gun, then the tin-foil is useless, and if someone is using the tin-foil, there’s little to stop you from just picking up a regular gun that can cut through the thin metal sheet like wax paper. There’s also a remote control bomb-car that’s usually positioned in some trophy location, but in all my time I have never seen it successfully land a kill before being driven off a cliff. And speaking of, there are a lot of falling fatalities I’ll happily blame on the camera, which zooms in nice and close to any living players, putting all pratfalls out of sight.

I admire the goofiness—it’s DUCK’s strongest asset. The end-game announcer’s constantly changing tie. The perma-cockeyed ducks. The option to wear a dumb-looking dinosaur hat. And of course, that glorious quack button. But in the name of silliness, they’ve created a lot of clutter, a lack of communication between the game’s structure and its vast permutations. It’s a bit like Mouse Trap: its grand allure is seeing an elaborate goofy Rube Goldberg, but the majority of its owners haven’t actually bothered playing the game. It’s a conflict that will show your friends’ true colours. Are you the competitive types that will just go for the jugular out of the gates? Are you all cool with calling a truce just to see what the foam darts are capable of? And how long before you switch from one audience to the other? How long can silliness hold you? Will you give quacks a chance, or shoot the person who wants to?