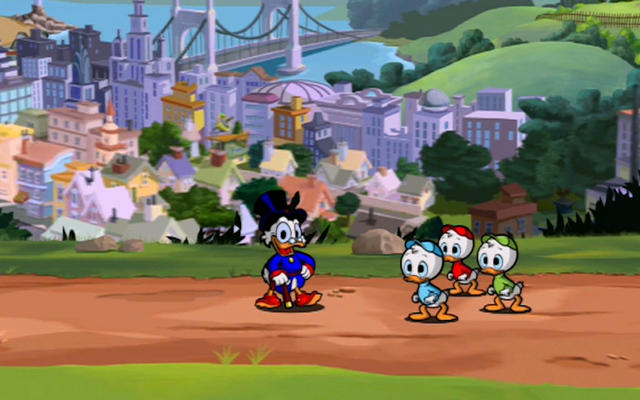 I’m uncertain how to assess Ducktales: Remastered. The game, as a 2013 object, is unknowable to me. Since I’m old enough to remember both the cartoon and the 1989 NES game it inspired, I can’t see this game without invoking crisp feelings of lazy afternoons spent in Duckburg, singing the theme song to a cartoon that might as well not exist for those born after 1996. Any critique of it stems, at least in part, from deep-seated biases I may not even be aware of. So this new Ducktales game confuses me. More than that, it reminds me how guileless cartoons were twenty-some years ago, and this shift in attitude concerns me more than any lack of new content for a game that was near-perfect upon its release.

I can’t see this game without invoking crisp feelings of lazy afternoons spent in Duckburg.

When Capcom announced Ducktales: Remastered, developed by sprite-magicians WayForward, the reveal came like a wish granted out of a well overflowing with coins. That subtitle describes an important distinction between this and other reworkings of past material. A “remaster” isn’t an homage, nor does it take inspiration and spin it into something new. When a movie is remastered, the film stock is cleaned and the audio is bolstered; the end result is an attempt to purify the original. And so it is with Ducktales: Remastered, which scrubs clean the characters and backgrounds and enemies using modern technology, rubbing out the 8-bit pixels of necessity for a smooth animation rivaling the drawn cells from Disney themselves.

We don’t remember things from our youth more fondly due to time. We misremember the actual experience

This spit-and-shine approach leaves the underlying foundation exactly the same. Playing Ducktales: Remastered is like seeing a memory through the corrupting, beautifying filter of nostalgia. The concept of rose-tinted glasses is tired and cliched, but also inaccurate: We don’t remember things from our youth more fondly due to time. We misremember the actual experience, papering over the cracks with vague fondness. The more accurate metaphor than tinted lenses would be wearing the same lenses you wore twenty years ago. Eyes grow weak over time; they need stronger prescriptions. When adults think back to playing Ducktales in 1989 they’re seeing with blurred vision, a memory untapped for decades. We reassemble the pieces and squint; the resultant picture is hard to make out so we assume greatness where perhaps there was none.

It’s as if the game came unstuck in time.

While the original was a marketing object to bring in more viewers to the TV show, today’s 2013 version has no connective tissue to anything beyond the game, connecting only with those whose memories reach back to 1990. Ducktales: Remastered exists in stark contrast to Capcom’s most recent NES-era downloadable reboot, Mega Man 9 and 10, experiments in playable anachronism made to look exactly like their 8-bit prequels. That character has existed since in various permutations, in the arcades, on subsequent systems, as a fighting game character, even on phones. But Scrooge McDuck has been retired—as had been his original voice actor Alan Young, now 93, who came back to record dialogue for the new game.

As a fan of the original show, the game itself plays like a long-lost episode, one I’m happy to have watched and played.

It’s as if the game came unstuck in time. While the Wii U and Xbox 360 versions are digital-only, the PlayStation 3 version is even getting a physical release, another indicator this game rests uncomfortably in our 21st century’s digital reality. Inside the boxed retail version? A download code printed on a paper slip.

As a fan of the original show, the game itself plays like a long-lost episode, one I’m happy to have watched and played. But I understand why this new game was not released alongside a re-launched cartoon on the Disney Channel. The game’s dialogue harkens to an age before the unremitting snark and shouty attitude prevalent on shows aimed at the preteen demographic. Some reviews found the wordy cutscenes boring and tiresome; I couldn’t help but follow along, grinning with the predictable punchlines or chuckling at Scrooge’s old-timey scorn: “Go soak your head!” he tells his nemesis at one point. That’s about as edgy as these ‘toons get. The softness goes down as a palliative for the decade of coarse chatter overheard from my nephew’s favorites. (Call me Scrooge McIrwin.)

That same lack of cynicism underscores the game’s unrelenting adherence to its 8-bit foundation, an age before endless checkpoints and hundreds of 1-Ups. So let this be a final warning. If you remember fondly the ecstatic Moon Level theme, or know what the Junior Woodchuck Guide is, play this game. But tread lightly. Soon you will defeat the final boss; soon you will leap from rock to rock, ascending the vertical shaft of a volcano while the magma rises underneath your webbed feet. And when your footing slips and you perish under the hot lava, out of time and out of lives, and you materialize not at the start of the game-ending finale but back in your mansion before the final level even began an hour or so ago, then you will remember the pain of old ideas. These high standards work like old children’s TV shows: both teach you to be better than you are.