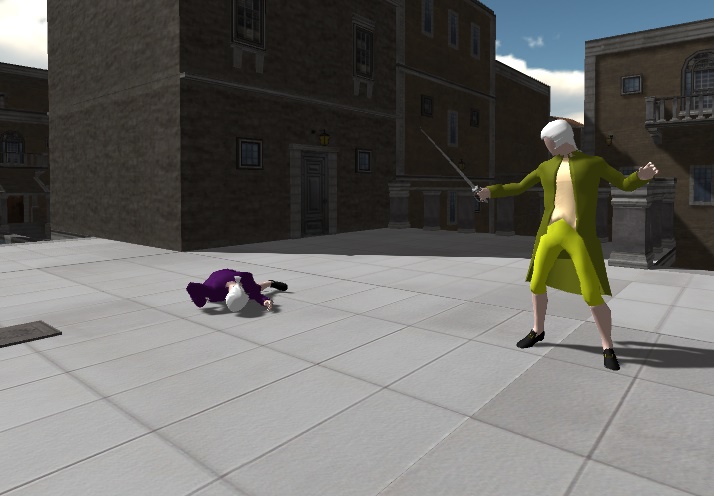 Any videogame that aims to represent the things we can do with our bodies (i.e. attain realism) has to bring in some kind of abstraction to make it look or feel familiar. Take, for example, the Assassin’s Creed games, in which combat isn’t really meant to be realistic as much as it’s supposed to capture the frenetic fights of action movies—full of brutal sound effects and finishing moves with sweeping cameras.

Likewise, there is Chivalry: Medieval Warfare (2012), one of the few games with first-person sword fighting, whose goal is to provide a robust and competitive multiplayer arena. As in a lot of multiplayer games, players have developed their own meta game, with exploits and strategies you wouldn’t find anywhere else. Super jumps and weird timing tricks aren’t particularly common in real-life fencing.

bodies and blades bounce off each other comically

Aiming in a totally different direction is Duello. It’s a new game that wants to tackle historical fencing with a “realistic” approach. Its wig-clad protagonists are dressed in brightly-colored versions of 18th-century garb and carry pointy rapiers that you can waggle about with the right analog stick. It’s just in the earliest of alphas for now, but you and a friend can duke it out in split screen.

A realistic first-person fencing game has to be able to let you look for openings in your opponent’s defense, it has to let you take distance back and forth and trick your opponent into thinking you’ve made a mistake. Modern fencing, at least, can be an incredibly fast sport—which is part of why it works so poor on television.

At the moment, Duello’s QWOP-like goofiness of movement gives it an earnest charm. You can advance and retreat jerkily back and forth, or swing your arm around, or hop straight into the air to get that surprise edge. It’s physics-based, so bodies and blades bounce off each other comically, and if you’re not careful you might trip and have to pick yourself up off the ground. This humor is accented by the self-serious blood-red text that splashes across the screen when one player stabs her opponent enough: “Player 2 is dead, honor has been satisfied.”

While a difficult undertaking, a realistic fencing game definitely isn’t impossible—Nidhogg (2014) actually does a pretty good job of forcing the give-and-take of space and the timing plays of sport fencing in a 2D game. It does also have dive kicks and man-eating dragons, though, so I’ll be excited to watch how Duello chooses to abstract the sport into its historical premise as development progresses.

You can buy into Duello’s early alpha over on itch.io.