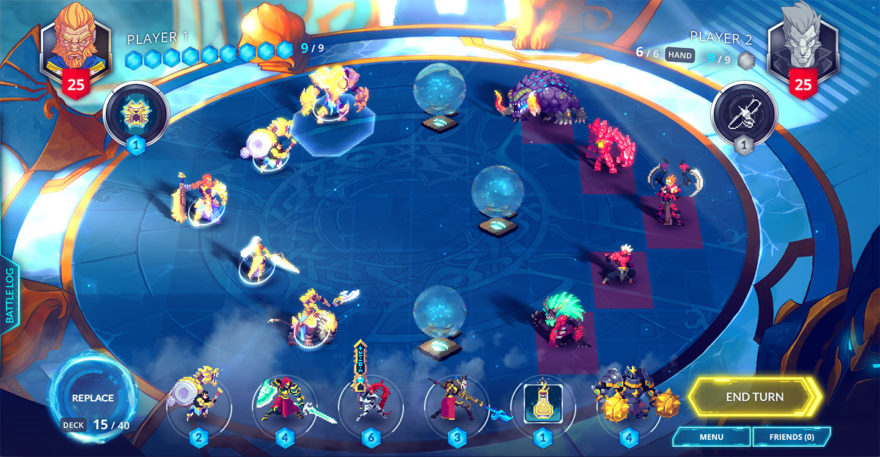 J.K. Rowling was remarkably creative when coming up with Wizard’s Chess. A favorite pastime of Ron and Harry’s in the early Harry Potter books, wizarding chess is exactly like regular chess, except the pieces move by themselves and smash one another when taking opposing squares. “That’s totally barbaric,” opines Hermione in the first film. “That’s Wizard’s Chess,” responds Ron, as if pitching the game to a room full of Hasbro execs.

As evidenced by Duelyst, though, the gimmick is surprisingly effective. The first thing anyone will notice about Counterplay Games’s tactical RPG, collectible card game (CCG) hybrid is its irresistible pixel animations. All thanks for those should go to artist Glauber Kotaki, best known previously for his work on Rogue Legacy (2013), and the not-yet-released Chasm. His style is vibrant and kinetic, and no doubt a large part of what made Duelyst‘s original Kickstarter campaign such a success. Compared to the game’s more static analogues, from Hearthstone (2014) to chess, a graphical hustle motivates every individual unit and spell with casual grace.


Imagine a digital bucket filled with beautiful little toys that move and breathe and stab at your command, one series of colorful splashes after another. First you decide which bucket you’re going to play with in the form of a general and its corresponding faction—will it be a knight who can buff nearby units or a ninja that can teleport them? Then you decide which units, spells, and artifacts to fill the bucket with. Are a handful of late-game golems preferable to an army of weak, early-game wisps? Finally, you go and spill them onto a grid-lined battlefield against an opponent to see whose general can smash the other’s first. Defeats are hard-fought and victories feel more narrow

For all of the things Duelyst borrows from Hearthstone, including its free-to-play progression system wherein players can earn new cards by grinding out victories or pay for new packs with microtransactions, the use of a board with 2D movement transforms it into something fundamentally different. Instead of simply contemplating advantages in tempo or resources, the game augments these factors by introducing spatial considerations. Units can only move two spaces in any direction, making positioning a key consideration. Vulnerable glass cannons can be kept safe by placing them behind a defensive line, or beefier units can be thrown behind enemy lines to try and cut off retreat.

People’s favorite Hearthstone moments are usually when an unforeseen combo or bit of luck completely upends the field of play. But in Duelyst, I find myself drawn to the way incremental changes slowly pile-up until their cumulative outcome is all but inevitable. The game’s co-creator, Keith Lee, who was a project lead on Diablo III (2012), explained this design philosophy in an interview last year. “Everything we do is designed so that you know deterministically what you are going to get,” he said. With the exception of drawing new cards at the end of each turn, Duelyst tries to take chance out of the equation.

For all of the similarities to Hearthstone, this mode of pursuing victory more firmly cements the game’s relationship to chess. When asked how many moves ahead he played, the world chess champion José Raúl Capablanca is reported to have responded, “Only one, but it’s always the right one.” Where others might try to over-engineer their victories, Capablanca played logically and concisely. What Duelyst does is take that sentiment and marry it to a lush and imaginative presentation.

There’s spectacle going on, but not the kind that will win a game in two turns. Defeats are hard-fought and victories feel more narrow, not least of all because the progress of a match is tied to the movement of actual bodies on a board rather than words on a piece of paper. Despite being confined to the intangible photons emitted by a computer monitor, nothing else has come close to capturing the methodical thrill promised by Wizard’s Chess quite like Duelyst.

You can find out more about Duelyst and start playing it over on its website.