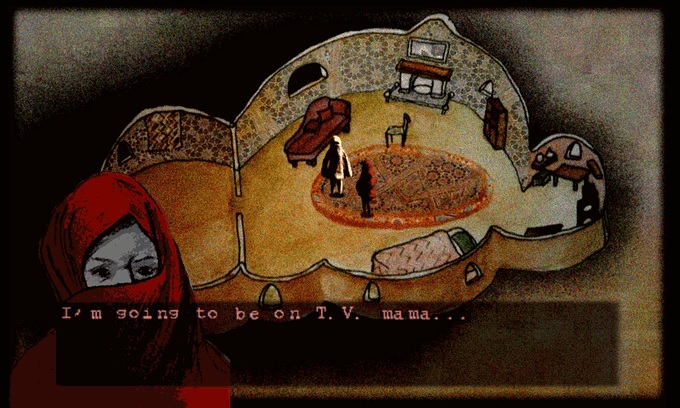 Space travel, alien babies, Justin Bieber—this and more has been the subject matter of the Sluggish Morss games, a series most known for the YouTube freakouts that occur when played by the uninitiated. Today, the co-creator of Sluggish Morss, Jack King-Spooner, has announced his newest project called Dujanah over on Kickstarter. But if you’re hoping for another “WTF game” to pull faces agape, well, you might be disappointed.

Sure, King-Spooner may be known for games that stretch their journeys far into the abstract but he’s moved away from that in more recent offerings. Beeswing, released in December of 2014, was a quiet and deeply personal game about King-Spooner’s hometown in rural Scotland. On the other hand, the most recent entry in the Sluggish Morss series, Days of the Purple Sun, left behind the expected fever-dream narrative in exchange for a more approachable multiplayer model that put competition front and center. That said, the two games are recognizable of King-Spooner’s style, if nothing else than for his familiar art style: a blend of digital graphics, claymation, and collage.

decidedly in the realms of magical realism

Dujanah, while marking a return to King-Spooner’s narrative focus, doesn’t seem to be stepping back into abstraction. In fact, it looks to be the most widely accessible story he’s attempted so far. The game is said to follow the eponymous Dujanah, a woman living in a fictional Muslim majority country in the midst of a military occupation by foreign powers. The allegory isn’t too cut and dry, though; the world of Dujanah is decidedly in the realms of magical realism, and populated with plenty of strange denizens and surreal landscapes to discover.

Make no mistake, this is still a King-Spooner game, but it might be harnessing the stranger elements of his style for greater purpose. His signature claymation, for example, is still present in Dujanah, but this time is being used to represent the adobe buildings of countries like Morocco. This is only a guess, but it seems likely the split between King-Spooner’s love of folklore and the spill-over from his own wonderful imagination will mingle in fascinating ways with the rich Islamic storytelling tradition.

For those who may be concerned about a Scot fellow making a game in a fictional Islamic setting, King Spooner had a few words of reassurance when I spoke to him on the matter: “As with all my games, I have spent time researching and talking with people relevant to the subject and I plan to continue doing so, should the funding be successful…I’m not interested in maintaining the ideological and symbolic ‘otherness’ that many media decisions exacerbate.”

You can find out more about Dujanah and support it on Kickstarter.