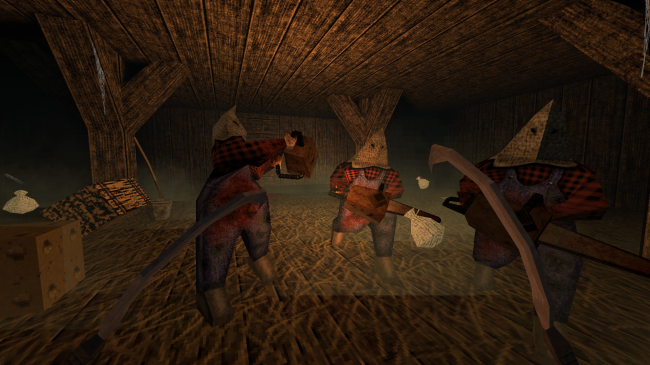 Living in the Northeast of the United States, David Szymanski grew up surrounded by the eerie woods and old buildings that dot the landscape in that part of the country. This is an area of the U.S. where you can find what Lovecraftian scholar S.T. Joshi calls “The Miskatonic Region,” the setting for many of the author’s strange and disturbing stories.

Since the age of 14, Szymanski has wanted to create a first person shooter set in this part of the U.S. Now 26, he is finally making that dream a reality with Dusk.

“I’ve always been a huge fan of Doom/Quake-style FPSs, since I was a young teenager,” Szymanski said. The idea for Dusk has been in his head ever since. In 2013 Szymanski created Pit, a game he described as “flawed.” It was his first attempt at making a fast-paced 90s-style shooter. After finishing Pit, Szymanski began creating narrative-driven psychological horror games. A Wolf In Autumn (2015) was his latest.

But after finishing Wolf, he felt “burned out” on those types of games and making games in general. “So I decided to take some time off,” Szymanski explained. “That is, spend time programming for fun rather than immediately jumping into a new serious project.” After starting and stopping work on a few ideas, Szymanski decided to model a low-poly shotgun and attached it to a camera in Unity. He wanted to see how much he could make it look like Quake (1996). “And things kind of took off from there,” he said.

“EVIL MAGIC and INDUSTRIAL WASTE HAVE BEEN FERMENTING TOGETHER”

The area where Szymanski grew up is also influencing the story of Dusk. 90s shooters weren’t known for their sweeping or epic narratives and Dusk, too, won’t have much in the way of storytelling. Still, it will have a semblance of a narrative, which Szymanski explained: “A huge network of Lovecraftian ruins are discovered underneath a section of rural farmland, and the government decides the best way to deal with it is to build a bunch of research facilities and factories to harness whatever magic they find. Eventually a combination of possession and industrial accidents forces them out and the whole area is sealed off.”

The player in Dusk is a down-on-their-luck treasure hunter who hears rumors of ancient gold hidden deep within the sealed area. “So they’re entering a place where evil magic and industrial waste have been fermenting together for years, with all sorts of weird possessed humans and weird creatures to deal with.”


Part of making Dusk resemble a high-speed shooter from the 90s are the visuals. Dusk looks like it was built in the Quake II (1997) engine but, in fact, it’s being built in Unity—a modern game engine capable of some truly impressive visuals. Which is a problem. “[The] biggest challenge is just convincing Unity to stop doing things that make the game look better,” Szymanski said. Through a process of trial and error he has figured out different ways to make Dusk look truly retro. This involved not just using lower res textures, but using textures that had a smaller color palette—a limiting factor for games back in the day. Some of these settings can be turned on and off, “depending on how faithfully crappy players want Dusk to look,” Szymanski said.

Also key to manufacturing a modern game so that feels like it fell straight out of the 90s is the feel. To this end, Szymanski is making sure to recapture the nonlinear, hand-built level design games like Quake had, and to include secrets and abstract architecture seen in the original Doom. But not everything from the past is being included in Dusk. “I want to avoid unintuitive navigation and overly obscure puzzles,” Szymanski said. Not everything transfers so well into the present day. By the looks of it, there’s also some wild new moves in Dusk, but ones that feel oddly at home in this style of shooter—you can be launched high into the air and end up falling upside down while blasting your guns at enemies.


A track called “Endless” created by Andrew Hulshult for Dusk

The final aspect of 90s shooters that Szymanski and I discussed is the hard-hitting and fast-paced music. To effectively replicate this in Dusk he needed help. So he called Andrew Hulshult, who has created the music for numerous games, most notably the gory fan mod Brutal Doom. “[Szymanski] sent me a quick build of Dusk to check out,” Hulshult explained, “I sat there with the game in a very unpolished and unfinished state and played it for an hour or two, if that tells you anything.” Hulshult was even more excited to work on the project once he discovered that Dusk was being created by one person. “Less filters to funnel ideas through,” he said.

The music and sound effects Hulshult is creating for Dusk range from eerie ambience to heavy industrial metal tracks. Like Szymanski, Hulshult is a huge fan of the old-school shooters and this influence is heard in the music he creates for Dusk. “I am shooting for the same feeling I got when I fired up Quake or Quake II for the first time,” Hulshult said. But he isn’t trying to imitate the music from those 90s shooters; he wants to make something that sounds original and his music won’t be restricted by 90s-era PC hardware either.

This strive towards something original on the back of nostalgia is what Szymanski is also aiming for with Dusk. Yes, it’s heavily inspired by games like Doom and Redneck Rampage (1997), but he wants it to have its own style and personality. For him, it’s not about recreating those games from his teenage years, but being faithful to them.