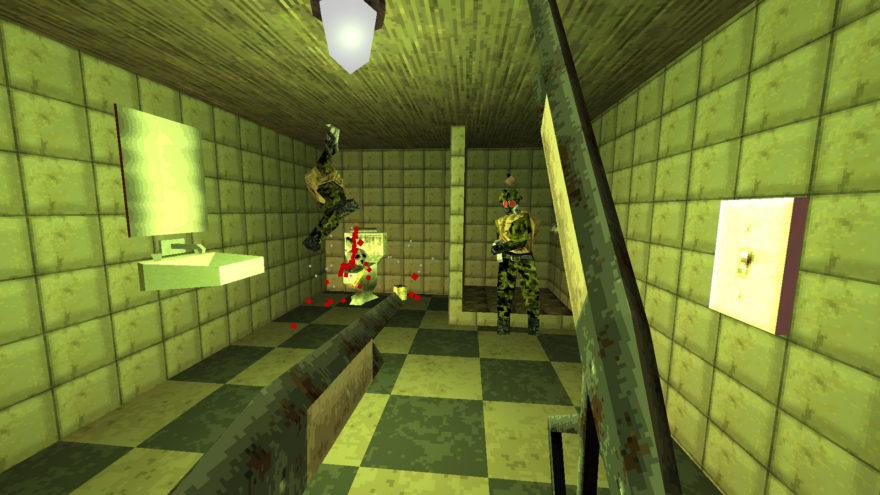 DUSK is an intentional throwback. It’s a game that deliberately, lovingly evokes the running, gunning, and no-reload bullet-dispensing of ‘90s shooters like Quake (1996), Blood (1997), and DOOM (1993). As with most exercises in nostalgia, it’s also pretty off-putting at first. Why make another Quake when right this instant Quake is available to play, as good as it ever was? Why roll around in the past when the future is always so much more exciting?

But give DUSK a chance and it makes an argument for itself. In the first moments of its preview version, a trio of burly, flannel-clad guys with burlap sacks over their heads and chainsaws in their meaty paws advance on the player. A disembodied voice croaks “kill the intruder” and a dim, dungeon-like room becomes a gladiator ring where the player—a voiceless, faceless pair of nasty sharp sickles—speeds around the arena like a trapped race car, showing off just how fast and bent on murder she really is. The look is standard: a flat, filthy lo-fi revival of early 3D. And the sound effects are a bit too dry to bring the necessary moisture that enlivens such a nasty setting. But the rhythm of the fight prevails.

Moments later, free of an initial set of hallways, that same character has become an ever-expanding collection of guns who zips around the borders of a cornfield and the exterior of an old farmhouse, or loads into the industrial maze of an endless “horde” mode, slaughtering to the tempo of the 16th-note ride cymbals propelling a delightful butt-rock backing track. The player is an acrobatic killer and her arsenal is strong. Gas-masked soldiers do little barrel rolls as they die, eager to ham up their expiration for the player’s benefit. Each enemy emits little clouds of pixelated red paint when an attack hits home. Everything about the game is familiar enough to conjure the past, but DUSK has a distinct enough personality that it approaches its own identity all the same.

flips the guns around like a show-off drummer twirling sticks

And the guns are pretty good, if not quite right yet. DUSK’s pistol is a pea shooter whose fire patters instead of bangs. But once you pick up a second pistol, Chow Yun-fat-ing the enemies with twice the bullets, that same patter double-times into a satisfyingly insistent, regular beat against enemy bodies. The double-barreled shotgun blast is tinny when a full-bodied explosion is called for, but, surprisingly, switching to its single barreled little sister amps the bass, properly coupling the flinging backward of almost-corpses with the sonic oomph the movement deserves. A grenade launcher barfs projectiles from its jaws like a steel cat spitting hot iron hairballs, though the enemies blow apart with a surprising lack of aural ceremony (the ungrateful jerks).


A few of the current weapons—the crossbow and that double barreled shotgun in particular—feel like they need a bit more time in the oven, but DUSK is on the right track. It knows that a nostalgia shooter shouldn’t have a reload button, but is unique enough to understand that the player will press the “R” key anyway and rewards her with a little animation where the characters flips the guns around like a show-off drummer twirling sticks between fills. It’s a small touch, but hopefully indicative of DUSK’s direction. The seemingly minor details of a shooter so obviously obsessed with the act of shooting make all the difference.

If DUSK makes release with enough of these touches studded throughout, it’ll be something more than a recreation—and a reason to play its brand of old-shooter instead of the many ‘90s games to which it owes so much.