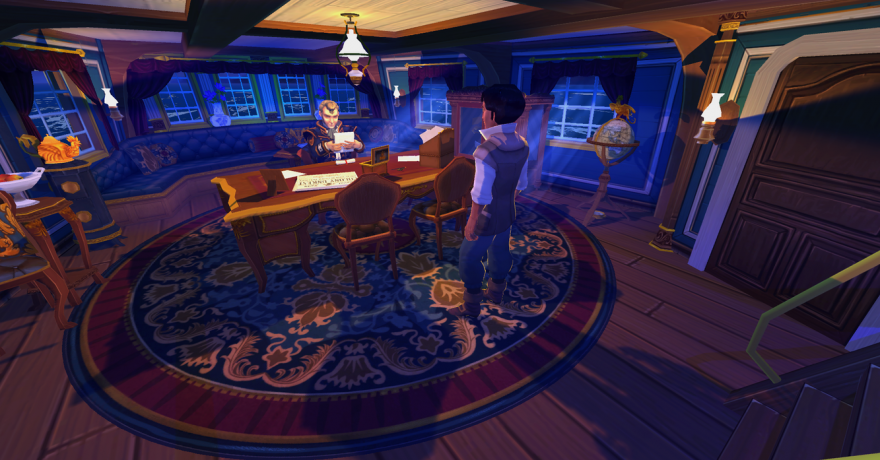 Herald’s narrative revolves largely around one question: How does your cultural heritage influence your identity? For many—including the point-and-click period drama’s protagonist, Devan Rensburg—it’s a complicated question, made even more complicated by the world’s history of colonialism. The “violent cultural clash” of colonialism plays a massive part in the complexity of the multiracial identity; and those complexities are what Herald aims to take on, through the eyes of the in-game ship’s (the HLV Herald) mixed-race steward.

Wispfire cites a certain urgency in putting out this game now, in this cultural climate. Race and immigration are at the forefront of many political conversations—including in the Netherlands, where Herald developer Wispfire is located. There, Geert Wilders, a far-right, anti-Islamic politician from the Netherlands, has influenced much of the conversation. Wilders was born of Dutch colonialism. His grandfather, “a high-ranking bureaucrat in the Dutch colony of Indonesia,” was more-or-less forced out of Indonesia when the country was decolonized. Anthropologist Lizzy van Leeuwen believes Wilders’ political leanings are defined by his Indonesian roots, of which he kept secret from the public for much of his life.

When development on Herald first began, Wilders was at the height of his political popularity; Dutch people were feeding off his anti-immigration narrative, following a surge of refugees seeking asylum in the nation. Not much has changed in the Netherlands since then: “anti-European Union and anti-immigration sentiments are getting increasingly popular, as more and more immigrants rush to find safety in the West, in wake of losing their homes, and in fear of losing their lives,” Wispfire’s Nick Witsel said.

Wispfire cites a certain urgency in putting out this game now, in this cultural climate

Like Devan Rensburg, Wilders’ ancestors operated in a space where they were neither one nor another, and van Leeuwen would suggest that underlying culture displacement is reason for Wilders’ anti-immigration platform. Wilders “operates in a post-colonial political dimensions, without it being recognized, says a lot about how the Netherlands dealt with, and still deals with the colonial past,” van Leeuwen said. “Keep quiet, deny, forget and look the other way have been the motto for decades. Because of that, no one could imagine that what happened in Indonesia 50 years ago could still have its impact on modern-day politics.”

The Netherlands’s own “freedom fighter” made his choice. As Herald’s Devan Rensburg, you’ll have to make yours, too. Developer Wispfire doesn’t want to keep quiet, deny, or forget the world’s colonial past—it wants you to be a part of it. It wants to simulate experience, and teach you “something about yourself and the world around you,” Witsel said.

Certain crew members aren’t tolerant of those who differ: “You, the player, can object to this intolerance from the start, and in doing so, forego any chance of having a peaceful relationship with [the crew member,] and in doing so, severely increase the chances that you and your friends will end up being canned,” Witsel said. On the other side, cooperating with the crew member opens up other opportunities—though in that case, “abiding by commands could lead to disdain” from other people of color on the ship.

“Many of the characters and conflicts found on board the Herald serve as metaphors for larger, timeless conflicts and ideologies,” he added. “It is through experiencing the consequences of your choices that you come to understand where many of these struggles and thoughts stem from.”

A playable Herald demo will available at the Indie Arena booth during gamescom 2016 in Cologne, Germany. You can pre-order the game on the Herald site.