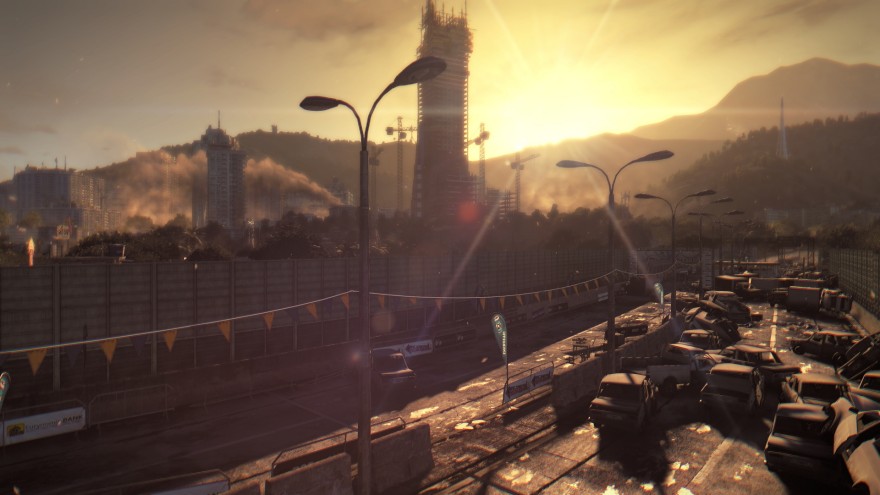 The light is slowly fading away, the landscape in front of me turning from a bright yellow to a burnt sienna, the first signs of impending night. It’s beautiful and ominous all at once, the decimated city of Harran still and calm for just a moment. When night hits though, that feeling changes. There’s nothing warm or comforting about the streets anymore. Where the streets were filled with slow-moving zombies during the day, night unleashes terrors previously unseen. Very fast, very hungry, and very scary zombies called volatiles roam the rooftops, a place where during the day you could hide, removed from the gaping jaws of the zombies below. During the day, there’s hardly a herd of undead that you can’t sprint past. At night, you’re lucky if you can sprint a few feet without drawing the attention of a volatile. I’m afraid to move from the rooftop and try to sprint to a safe zone, but what other choice do I have? I can’t make it through the night out here. I need the day to return.

In terms of storytelling then, Dying Light is a failure.

There’s a wonderful shift in feel and atmosphere in Dying Light. So many open-world games have an expanse of territory to explore, and yet much of the game feels the same. No amount of side missions or unexplored nooks can disguise the fact that much of what you’re actually doing is repetitive; you realize that the world you inhabit is big but unchanging, filled with meaningless moments. Dying Light offers up a different experience, one where the city of Harran, post-disease and presently filled with the hungry undead, feels lived-in. The city isn’t exactly operational; as Kyle Crane, an undercover operative sent into Harran to retrieve a file (which potentially contains the building blocks of a cure) for the GRE (Global Relief Effort), you spend most of the game climbing up towers in order to turn the city’s power back on and collecting supplies to bring back to the safe zones set up across the city. The city does seem alive, though—or at least crawling back to some semblance of life.

There’s an uneasy tension between this world and the story of what you’re doing within it. It is set up as one of moral conflict. Kyle Crane is a man divided, one who feels loyalty to the GRE and yet can’t help but wonder if he needs to help the people on the ground, the survivors in Harran that have been rounded up by a man named Harris Brecken. Crane is presented as a man in emotional turmoil, and yet there’s a mundanity to the missions that he undertakes, from collecting money on behalf of Rais, a stereotypical, maniacal crime boss, to setting up power grids. There are voiceovers that lay on the exposition thick, with Crane telling us that he’s conflicted about his role as a go-between for the GRE, Brecken and Rais, and he’s always mentioning how driven he is to find the missing file, because he’s infected, too. Once you’re out in the world as Crane though, those stakes evaporate, the narrative more of an intrusion than a guiding structure.

In terms of storytelling then, Dying Light is a failure. There’s hardly any narrative thrust, and the emotional beats are delivered through exposition rather than through any character insight or development within the narrative. It’s a paint-by-numbers survival story that vaguely ties in ideas of psychology and morality in regards to rebuilding society. Survival/zombie narratives are often most compelling when they’re intensely personal or universally applicable. A narrative that presents personal, emotional stakes, like the rescuing of family members, or muses on universal themes of where our morality comes from and how such ideologies shift in times of distress and destruction, allow for the gore and cynicism of the zombie-survival genre to pack a meaningful punch.

Without such a narrative, Dying Light devolves into almost pure gore.

Without such a narrative, Dying Light devolves into almost pure gore. It’s not that the game is inordinately bloody or hard to stomach; it’s that it presents itself like a sadistic RPG, where the main goal isn’t to find the aforementioned file for the GRE, but rather gain as much strength, agility, and weapon modifications as you can so that your zombie skirmishes become more and more ludicrous the deeper you get into the game. As you enhance the weapons in your arsenal, and build up your own ability to jump, run, and pummel, the zombie hordes become more like barely-moving target practice than a threat to your life. It’s fun, for awhile, but the absence of meaningful stakes, of an emotional storyline of some sort, ends up leaving it all feeling cheap. The glee with which one can strengthen her character and eventually shred through the undead isn’t enough to offset the moral bankruptcy at the very heart of the game, nor is it enough to quell the feeling that everything you do fails to serve a purpose other than collecting things. Dying Light forgets, or willfully ignores, that the appeal of the zombie narrative is the underlying questions of morality and social responsibility.

Standing at the peak of a suspension bridge, looking down on the zombie traffic jam from high above the city, the wind crackling, the GRE, Rais, and Brecken don’t matter to me. All I want to do is test my gumption and find some volatiles to fight; I can dropkick zombies now with extraordinary force, and craft flammable throwing stars.

This isn’t a game of jump scares, but it is one of dread. When you’re running from a herd of volatiles, and you look behind you and see them all chomping at your heels, there’s a rush of adrenaline. As the game goes on, and as the daytime becomes more and more mundane, a sense of routine creeping back into this post-apocalyptic world, I found myself seeking the thrill of the nighttime. I wanted to be out there running across rooftops and testing the power of the zombies, daring them to come after me, daring their skulls to test the force of my electrified shovel. The real threat wasn’t the undead; the real threat was the daytime and its routine. The return to normalcy, to the supply runs and the haphazard medical operations, is what terrified me most.