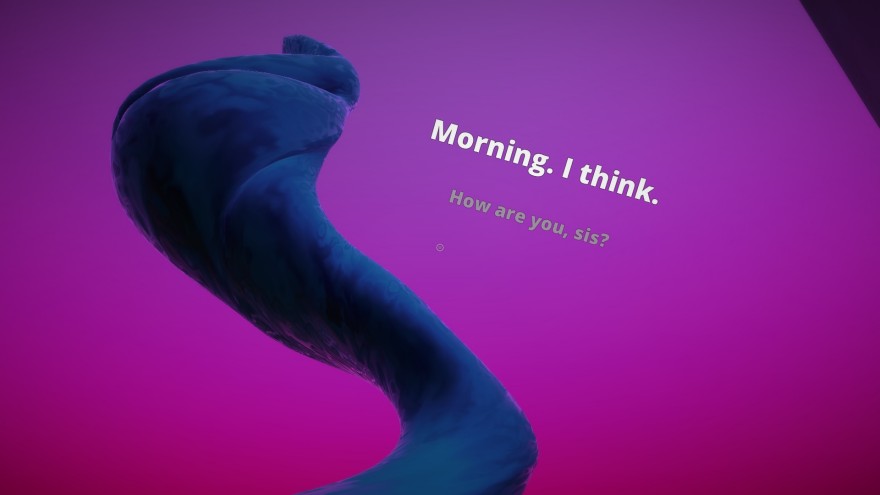 I remember reading once that a good fiction writer will paint images in your mind. This is vital to the craft; not just stating “a tree” so readers imagine a tree, but describing it so that this is uniquely a tree of your creation, one that will be remembered with intense detail if, say, referenced later in the text. Porpentine has not only injected my mind with everlasting and often gruesomely detailed images (being penetrated by a cyberqueen will never leave me) with her Twine work over the years, but has caused visceral feelings to thrive around my body, contorting my face as I read. She excels at this.

Her ability here is why I’ve never felt it necessary for her written work to ever need more than a custom font and a delicately selected hue as a background. Her choice of music doesn’t go amiss, either. My stance has always been that this limited format of text and hyperlinks couldn’t be realized with the same guts if it were a 2D or 3D world. It needs that vast imagination space that lets me turn her precise yet knotty sentences into dreamlike projections in my mind. But now that I’ve played Bellular Hexatosis—which Porpentine co-made with Brenda Neotenomie back in April for #adventurejam—I’ve changed my mind. It’s a surprisingly accomplished adaptation of Porpentine’s style as a 3D adventure game.

It’s about finding the antidote that your sister needs to cure her Bellular Hexatosis. This unknown disease is increasing her fragility day-by-day and as her only aid you care about fixing her deterioration deeply—the intimate conversation with her tells you this much—hence you travel the world to help her. Oh, and your sister is an enormous spiralling tower of petrified ocean, by the way. Typically, such an unusual form is something that Porpentine would craft with her words, but in Bellular Hexatosis it is rendered with 3D graphics. Luckily, it doesn’t reduce any of its otherworldliness, which is what I fear when something imagined is given a solid body, denying me access to visualize it from scratch.

graphics act as the bones, the words as flesh and fluids.

But, importantly, Bellular Hexatosis doesn’t let its graphics do all the work. It strikes a pleasing balance between direct depiction and textual implication. When you travel to the Seaside area, you can see chimneys poking out from under the water, billowing smoke. But it’s not until you click on the text hovering in the sky and start to read that you learn that these chimneys belong to underwater soda factories where vampires are concocting a new flavor to block the sun. Yep, it’s Porpentine in full swing; you’re shown a chimney but it’s her words that illustrate the factory below and everything inside it.

It’s not only that compromise that makes Bellular Hexatosis work. It’s also that the sense of exploring a space Porpentine manages through connecting text like rooms through killer use of the hyperlink is honored. The game opens up with the statement “Click words and objects to proceed.” Following this instruction, you navigate the 3D world of Bellular Hexatosis through the same means you would a Twine adventure. You stand static in a spot, able to look around the world from a first-person perspective, and to advance to the next static position you have to look at, read, and then click hovering sentences (side note: I love the way you zoom between locations to a great rushing sound, as if the game was showing the notoriously slow-moving Myst how it’s done). It works brilliantly to build the world as you move through it; the drowsy music and graphics act as the bones, the words as flesh and fluids.

And on that topic, one Tumblr user rightly makes a comparison with the writing in Bellular Hexatosis to the work of microbiologist and sci-fi author Joan Slonczewski. Porpentine employs similar word invention as the forebears of biologists and chemists to label her fictional diseases and chemicals. This pops up later as the gory webbing inside your body has its cavities labelled once you enter it (yep, that’s a thing that happens). Bellular Hexatosis also shares a setting with the water-covered moon in Slonczewski’s 1986 novel A Door into Ocean, plus there’s a similar sense of sisterhood and commitment to non-violence between the characters, whether it’s the sentient eyes you meet in the clouds, or your sleepover sex mate.

You can download Bellular Hexatosis on itch.io and Game Jolt, and you can also play it in your browser.