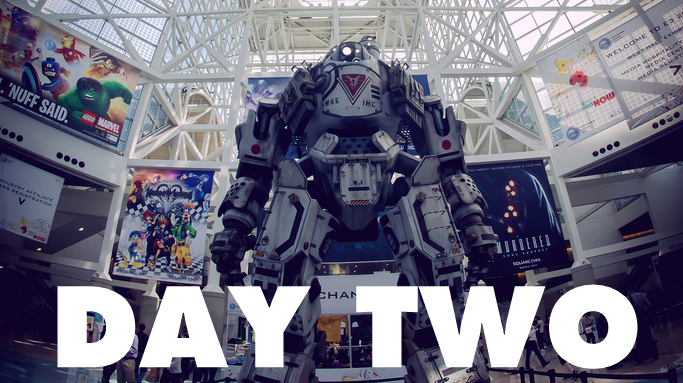 What amazes me about E3 each year is its utter, stubborn timelessness. This is my fifth year coming and each outing offers the promise of difference, of some change in the air. But each crowded show-floor, each ripping bass rip at the end of each trailer, and each iridiscent, irradiating branding element suggests that it’s the same as it ever was.

And yet, there are always diamonds in the rough. Here are some of my favorites for the day.

If you don’t know Japan Studio, you should. They lack a front person to sell the studio, but their fingerprint is all over some of the best games of the last decade including Ico, Shadow of the Colossus, Patapon, and Echochrome. Rain fits their oeuvre perfectly.

Initially, the studio conceived of a character who was invisible, but their producer said the team struggled to communicate exactly where this character would live on-screen. As Ralph Ellison could have told you, lacking a visual presence poses some significant challenges. As it turns out, rain is excellent foil to faintly illuminate the little boy you must guide through the naked city streets.

Games have struggled with noir as a genre for quite sometime. What the style requires is nuance, not the a strong suit for the medium. But the tonal simplicity and addition of love interest (or threat) communicates pathos quite well. The piano tracking score is a nice touch as well.

Years ago, I detailed the cutthroat impulses inherent in the four-player melee of New Super Mario Bros. Wii. Competitive multiplayer games always require a level of heartlessness but Nintendo had inadvertently created one the most diabolical titles I had ever played. My urge to physically assault my cousin while jumping through the halcyon world of Mario was unparralled.

It is with happiness I can report that no such bloodlust emerged during my session of Super Mario 3D World. We four journeymen—Peach, Mario, Luigi and Toad—danced with ease through three levels without stepping on each other’s heads. The pace is still quite manic, but the blood pressure stayed low.

Ricky Haggett and Richard Hogg have been working on variations of Hohokum for more than 5 years, so it’s nice to see the duo come closer to a release. Imagine Snake if the serpent had escaped the confines of your Nokia, taken to flight, nibbled some mushrooms, and blissed-out with technicolor creatures of the sky.

Pop-up books are quite in vogue these days (fellow Sony release Tearaway also adopts some of that mood) and Hohokum’s mystery was welcome. “If someone figures out how to actually play, we haven’t done our job,” Hogg told me. Here’s to trying!