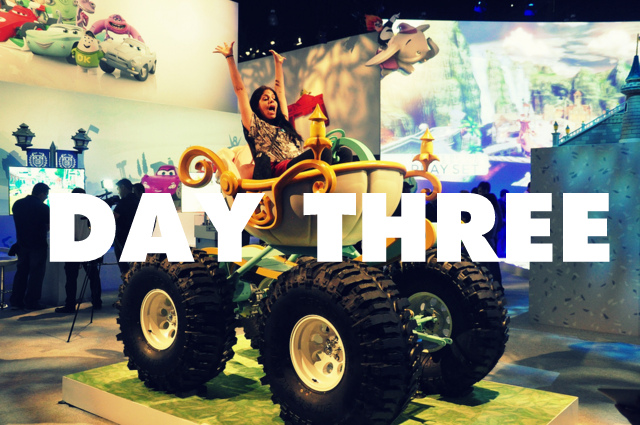 All done! After three days of deafening noise, shiftless crowds, errant zombies in the bathroom, E3 has finally pulled to a close. Here’s the rest of our favorites from the week.

I know what you’re thinking. Another Tom Clancy title? And yes that is true. But for people like me who find MMOs unenchanting, The Division offers promise. You play with friends to take on enemies in a virus-infected New York, one clan at a time. Better yet, you can use your iPad tag enemies with a drone. Just like real life! I generally find shooters boring, but this one piqued my interest.

If A Tree Screams In The Forest

I tend not to like horror games, because, well, I don’t like being scared. But the temptation of using the Oculus Rift for the first time was too seductive, so I plopped on the headset and jumped into Aaron Rasmussen and Michael Astolfi‘s game. The premise is simple—you walk through a forest with only a flashlight to guide you.

The catch: there are five very strange trees. Much like the ghosts from Super Mario Bros., these trees creep up on you when you’ve turned your back  and stop in place when you spot them. The tension is unbearable as every tree is a suspect at some level. Rasmussen pulled this together with less than a month, but it completely shows the promise of new (and terrifying) experiences on the Rift.

Sony put a ton of games on the showfloor, more than any other publisher or developer. That meant that a lot was prone to slip through the cracks. Contrast was one of those titles that might have been lost in the shuffle, but Compulsion Games’s clever take on light and shadow was a delight for the eyes.

The team at KnapNok Games also worked on B.U.T.T.O.N., the high-stakes, high-impact game we showed at MoMA a couple years ago. So it’s no suprise that their take on teenage classic Spin the Bottle shares that same physicality. Accomodating up to eight people with four Wii controllers, you are assigned a host of mini-games such as operating a virtual “seesaw” handcar, waltzing with a partner, and just general spinning in place. I danced hand-in-hand a bit with one of the game’s creators, Lau Korsgaard, which was awkward, but ironically not the strangest scene at E3.

You can see more here.

Canadian game designer Erin Robinson’s new game pulls heavily from my favorite experiences in Super Mario Galaxy: jumping from one planet to another. Gravity Ghost is a puzzle game, and a frustrating one at that, but the pull of each of the small planets creates the illusion of ease. Spinning helplessly in space is an unmooring experience. That’s the point.