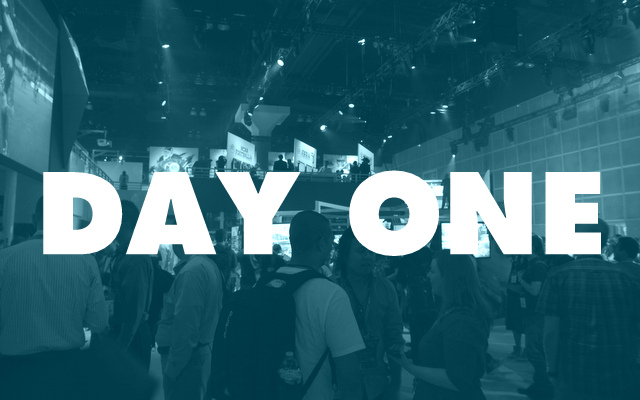 Instead of the usual onslaught of E3 news, we decided just to highlight the best of what we’ve seen so far. In the first half-day, I picked up a couple promising ventures.

Wilford has forgotten the name of the disastrous Michael Jackson venture that had the singer green-screened during its production, but the memory sticks with him. Twisted Pixel, as their name might suggest, actually has a yearly office contest to find the worst movie and their latest outing Lococycle feels pulled from the plot of one of those films. You play as a sentient motorcycle named I.R.I.S. who breaks free from a repair shop, but you have a guest. An unwitting Hispanic mechanic named Pablo has his pant leg caught in I.R.I.S.’s chasiss and is dragged along for the ride. You can’t make this up.

The challenge, of course, is making a “bad” game that actually isn’t bad. Wilford says they’ve watched so many B-movies that “they know exactly where the line is.” Voice talent from Freddy Rodriguez (Six Feet Under, Grindhouse) add a Hollywood punch and the manic gameplay style keeps the dialogue bristling and the dark humor bubbling. (Rodriguez’s character Pablo only speaks Spanish, but since I.R.I.S’ translation function is broken, she just chats with him casually while he begs for his life.)

Lococycle will be a near-launch title for Xbox One so look for it in the fall.

Illustrator Saul Bass was best known for his work on the title sequences of films like Vertigo. Before Bass, movie titles were little more than the perfunctory lists of actors and crew names. Bass made the first momemts of his films crackle with expectation and showed how design could be just as a cinematic expression as the film itself. “I want to make beautiful things, even if nobody cares,” he told an interviewer in 1986.

British designer Reece Millidge has taken that philosophy to heart with his charming new mobile title Icycle: On Thin Ice. Mobile games suffer from the same lack of style and panache as movie titles in Bass’ age. On Thin Ice is lovely to look at and Millidge’s profound use of background add diversity to a simple platform style of game. Each sequence is a puzzling little vignette and On Thin Ice‘s simplicity belies Millidge’s painstaking construction.

Icycle: On Thin Ice will be out later this year.

While other companies were busy putting Drake on-stage and feeding the thousands with food trucks, OUYA took a slightly different approach. The $99 Android console held an open-to-the-public street caravan with a giant orange RV showcasing some of the console’s newest titles. Tucked to the side was one of my instant favorites here at E3, Matt Thorson‘s Towerfall.

Harnessing the crazed energy of fighting games like Super Smash Brothers, Towerfall was easy to pick up and jump right in. Only one hit from your arrow kills others, leading to one lightning round after another. Platformers were quite in vogue with indies in the past couple years; perhaps brawlers are the next shiny new thing.

Towerfall will be out June 25th.