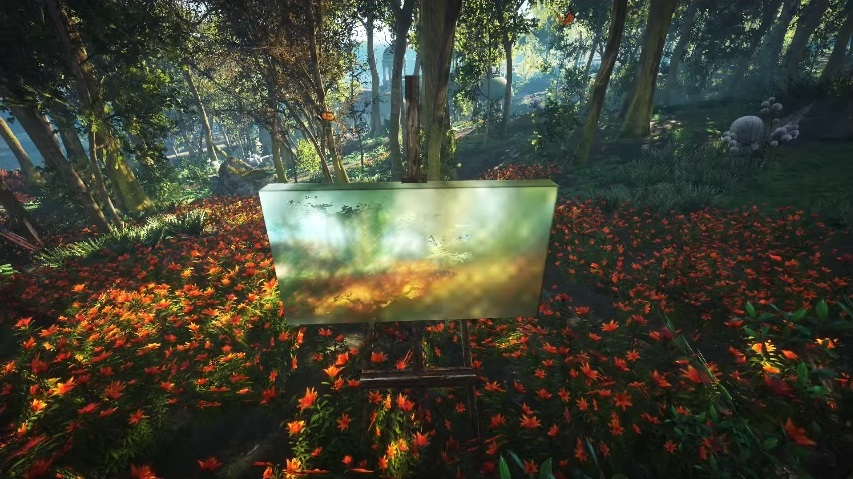 Hark, another open world, first-person game in which you traverse picturesque natural environments!

That is both slightly unfair to Eastshade, a PC game that is currently in the making, and factually beyond reproach. Eastshade, as with many games before it, is all of those things, but it is also endearingly meta. You play as a painter who wanders through natural vistas in search of inspiration. That shouldn’t be too hard to come by, as the game offers stunning visuals, but there is still the not insignificant matter of framing. As you go about your business, you can stop to paint a portion of what you see, and those paintings can then be used to ply other characters for favors or physical goods.


Eastshade is a curious entry into the “are games art?” debate. It is not making an argument about the artistic merits of games per se, but the fact that the game’s universe can quickly be transformed into a painting is still telling. If the universe becomes artwork (in the traditional sense) when it’s put in a frame, isn’t that what it always was? Conversely, if you need a frame to think about a game’s visuals as art, what does that say about you?

we all live within paintings

In that respect, Eastshade is attempting a similar trick to Mike Leigh’s film Mr. Turner. In that latter work, the line between film and J.M.W. Turner’s paintings is regularly blurred. Outdoor scenes have the same thickness as the English romanticist’s works—and are only flecked with slightly less spittle. (Tom Hooper’s The Danish Girl occasionally goes for this trick as well but, as with the rest of the film, it comes up well short of the mark.) All of these works suggest—with various degrees of success, granted—that we all live within paintings. The role of other works, then, is just to make that reality apparent.

You can find out more about Eastshade on its website.