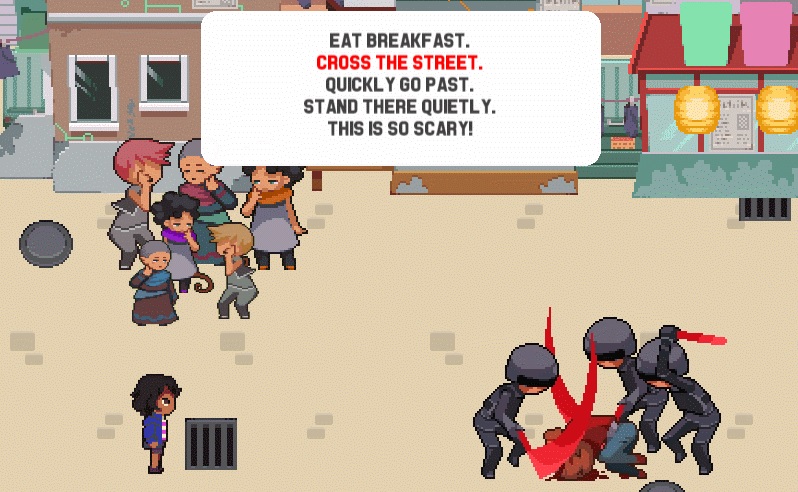 Yvvy, the designer of the upcoming Easy Level Life, knows you can’t “win” against police brutality. “The closest thing to a win condition where police brutality is concerned, is simply not being the wrong skin color,” they told me. “The game is the same way.”

Easy Level Life popped up on Twitter on Monday, the 11th, just after a week that saw two black men killed by police a day apart. Yvvy said that every time this happens, “I see the same questions: Why did they do wrong that the cops shot them? Were they listening to the cop? Why were they afraid if they didn’t do anything wrong? If the cop was afraid, didn’t they do something wrong?”

A software engineer by trade, yvvy took a few days off reSyNCh, their larger project, to turn out Easy Level Life. It’s an issue that’s not suited to traditional games, which in basic terms demand understanding of, if not victory over, their systems. Tensions between police and people of color are systemic, entrenched, and impossible to “beat.” But yvvy’s not deterred.

The game explicitly seeks to tackle those persistent questions about personal responsibility in the face of law enforcement. Yvvy says they’re “often asked by people who have never had a reason to fear the police before.” Working with an artist, @nebelstern, yvvy wants to provide some perspective. An early build of the game lets you play as a middle schooler who comes across a man being beaten by three cops with nightsticks. You’re faced with a list of options to get yourself out of the situation alive, but no matter how innocuous your choice it ends in a sharp, abrupt gunshot. Once you’re dead, the newspapers do their work to make you seem like a threat: whether opening a candy bar or standing stock-still, there’s no way out.

“It’s close to my heart as someone who has to face this violence,” yvvy said.