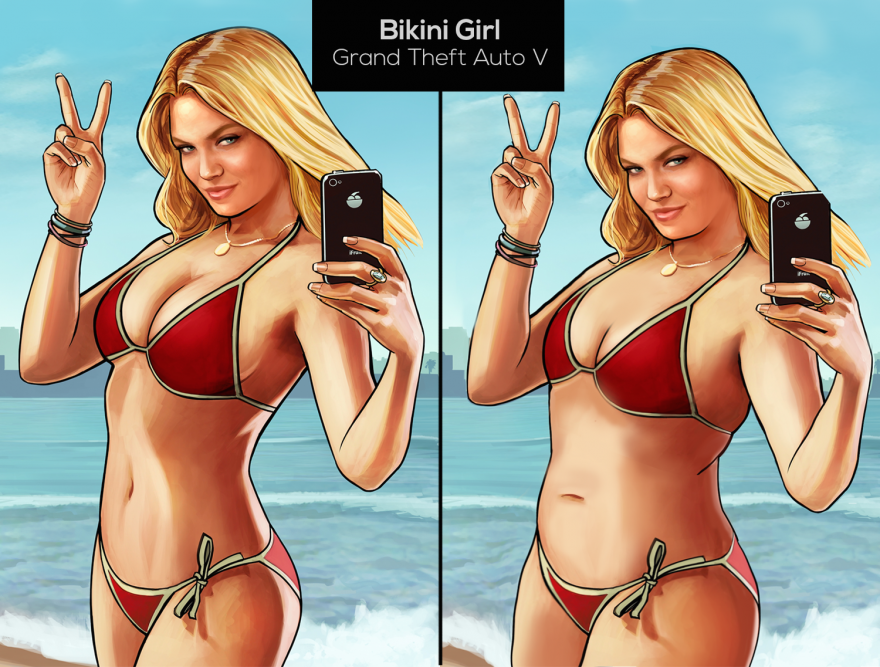 It’s no secret that media’s treatment of female bodies is all around terrible. But for videogames and other animated media, the idealizing of women’s bodies presents some uniquely awkward issues (have you seen the breast physics?) For example: according to the 2013 Game Developer Magazine survey, only 16% of gaming’s artists are female. That means 84% of the people creating the female bodies you see in videogames have absolutely no concept of what it means to live inside a female body. It’s no surprise, then, that many of their depictions result in tone deaf designs that not only perpetuate unattainable beauty ideals, but also seem confused about the fact that women are of the human species.

As the online eating disorder support group Bulimia.com puts it, “video game designers and their companies have complete control over the female bodies in their games. So why is it they so often opt to make these characters into unrealistically idealized versions of their human counterparts?” Of course there are many possible answers to that question—industry standards, unconscious biases, the tired conviction that “sex sells”—but each is as unsatisfactory as the last.

The support group goes on to call out the industry on its contradictory aesthetics, noting that “gaming studios boast hyper-realistic lighting techniques, touting natural cloud movements as the latest features of their games.” So why, they wonder, despite all the endless time, money, and man power they sink into perfecting every photorealistic detail, can studios still not get the female body right? “If video game creators are going to pride themselves on accurate digital representations,” the article posits, “then it’s time for them to get real about women.”

“it’s time for them to get real about women”

And, in case videogame studios require a reference to achieve such a feat, Bulimia.com decided to recreate iconic female videogame characters with the proportions of an actual average human American female. The results speak for themselves, illustrating how normal body proportions do not detract from the badassness of Cortana (Halo), Lara (Tomb Raider), or Jade (Mortal Kombat). Instead of just highlighting what the industry gets wrong about the female body, however, the recreations also emphasize exactly what they get right, demonstrating how each character–regardless of proportion—remains as awesome as ever.

Of course, this has been an ongoing conversation for the industry for many years now, which lead to some marked and celebrated improvements. The model used to recreate Lara Croft, for example, comes from an old 2003 game rather than the 2013 reboot, which toned down her notoriously ridiculous proportions. “If you look at how her form has changed from the original, it’s clear developers are listening to feedback from consumers,” one of the websites representatives told Motherboard. “They’re definitely moving in the right direction.”

Yet even the rebooted Lara is not above reproach, despite all her improvements. Although her bodacious curves have been subdued, Lara’s redesign continues to perpetuate a thin-obsessed culture which in turn leads to the very diseases Bulimia.com hopes to end. Don’t get me wrong, Crystal Dynamics was brave for implementing these changes that, ten years ago, would’ve been thought of as sacrilege. But it just goes to show you how weight-obsessed our culture really is. Because we were willing to reduce her iconic breast and bum size. But a normal, human waist line? That’s crazy talk.

The online eating disorder support group closes their argument with a cautionary tale, explaining how these rigid beauty ideals do not exist in a vacuum. When young girls cannot see a single videogame heroine whose waist line is bigger than her pinky, it could mean “the beginning of obsessive thoughts about their own bodies, and self-questioning as to why they don’t align with their perceived ideal. When dangerous, compulsive eating behaviors develop alongside of these negative obsessions, young women can quickly find themselves struggling with an eating disorder.”

Finally, Bulimia.com delivers a sobering public service announcement, reminding its readers that, “if you are concerned that compulsive and maladaptive eating behaviors are negatively impacting your life, or know someone close to you who might be struggling with an eating disorder, help is available. Call Bulimia.com’s toll-free line, at 1-888-994-4036 for more information on eating disorder treatment – get started on the path to recovery and reclaimed health.”

You can read the full post and see the full range of redesigns here.