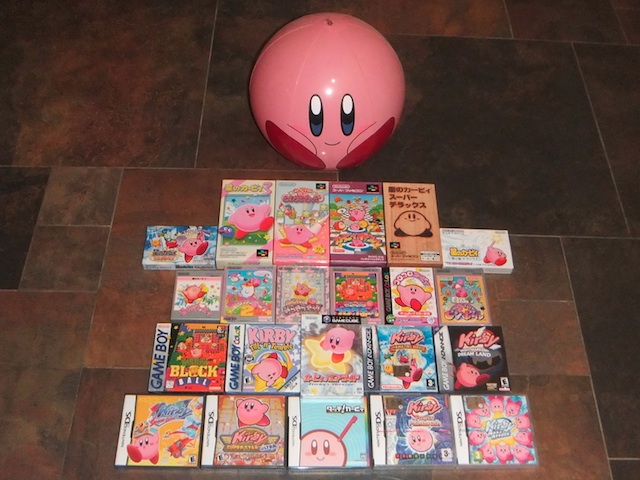 A jaw-dropping collection of games, chockablock with more videogameania in one place than this games writer has ever seen, was put up for auction on eBay with a starting price of $575,000.00 but ended without receiving a bid.

The sale was for some 6850 games, 330 systems, 220 controllers (including the controller for the train sim Densha de Go!, which has two levers for throttling and braking the train), and around 185 accessories, notably an adorably cute, pink Kirby bouncy ball. Most everything was complete and in near-mint condition in the box. You could spend a day perusing the 500 some-odd photographs of games uploaded by the seller *videogames.museum*, who is in fact not a museum.

The size of the collection ranges between unwieldy and ungodly. Mr. *videogames.museum* has spent a lifetime and a fortune amassing the videogame Mecca, or at least the Taj Mahal. From the sound of it, he ran out of storage space and has no use for so many games. “I have too many things and my space to store them has finished long ago. Also, I realized that if I want to play at least half of my games, I should live two or three entire human lifetimes,” he says.

This makes me wonder how someone gets locked into such an extreme collection. Why do we collect games at all? It’s easy to claim that we are creatures of capitalism, or chalk it up to pathology, but sociology and psychology shed little light on an answer. Sigmund Freud, who I find to be the most quotable but least reputable authority on any subject of the mind, traced the hobby back to our feculent socialization when we learned to go potty.

But Walter Benjamin, a master collector of books who wrote the essay “Unpacking My Library: A Talk About Book Collecting”, gives collecting a positive spin.

The most profound enchantment for the collector is the locking of individual items within a magic circle in which they are fixed as the final thrill, the thrill of acquisition, passes over them … the period, the region, the craftsmanship, the former ownership—for a true collector the whole background of an item adds up to a magic encyclopedia.

Benjamin sees owning a collection as a way of connecting to the broader world, and from that perspective, owning a bunch of cartridges in paper boxes makes sense. And its true. Though my collection has dwindled in the move to digital, the great ones (Diablo 2, Super Mario Galaxy 2), the weird ones (Earthbound, God Hand), and the personal ones (Ecco the Dolphin, Shin Megami Tensei: Nocturne) remain.

I can take my copy of any one of those games from the shelf, hold it in my hand, and remember where I was and what I was doing when I played it, other games that came out around that time, people in my life, circumstances, pets and family, and sitting on my sister’s bed, playing a “girl’s game” about dolphins with my best childhood friend. Things I otherwise wouldn’t think of.

So, maybe game are worth holding on to — in moderation!