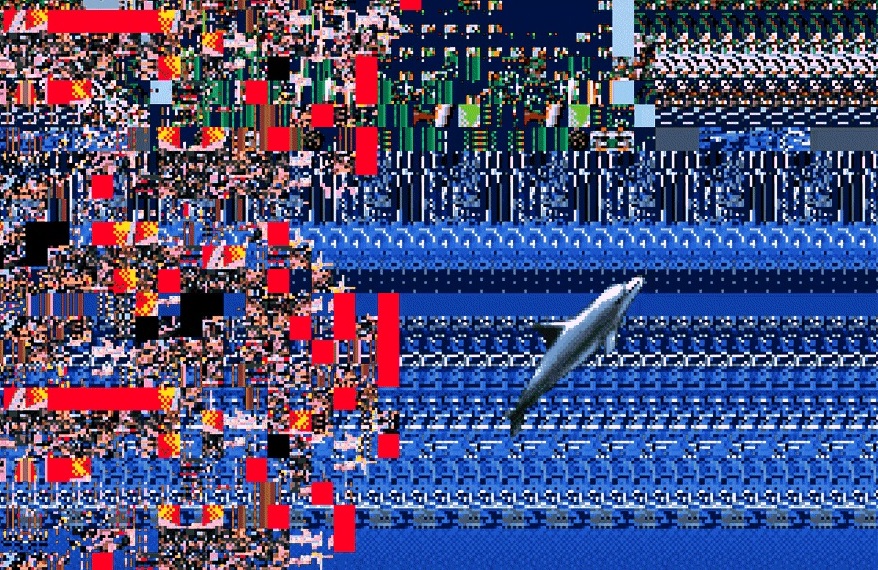 All images created by and belong to Sabato Visconti.

In Sega’s absence, the 1992 undersea videogame Ecco the Dolphin has developed a perplexing life of its own. Back in 2010, musician Daniel Lopatin released a cassette tape limited to 100 copies that contained an album called “Chuck Person’s Eccojams Vol. 1.” Not only was Ecco‘s name in the title, but the tape’s artwork was a chopped-up image of the original game’s cover art (created by fantasy scene painter Boris Vallejo) as a tribute to it.

As to the cassette tape itself, it contained 14 unnamed tracks of slowed down, fragmented, and looped pop tracks. These are said to be “echo jams.” While the screwy micro-loops are jarring, beyond that the music’s glacially slow tempo in parts is somewhat narcotically profound in effect; hazy, meditative, perhaps even transcendental. It’s this that has become the foundations of an art movement known as “vaporwave.” The distorted audio remix and Ecco the Dolphin were a big part of the movement’s aesthetic inspirations.

a voidspace where Ecco can chill out forever

Writing about the Eccojam cassette and how it informed vaporwave, John Behm focuses on the track Eccojam A3, which samples the 2006 R&B track “Too Little Too Late” by JoJo. This is what Behm writes:

“Chuck Person takes the phrase “be real, it doesn’t matter anyway (you know it’s just a little too late)” and sets it looping over and over for three minutes. In its original context, that lyric means almost nothing: it comes off as more of a redundant filler lyric than anything. Yet, when repeated and slowed down to a point where it might even sound chanted, “be real, it doesn’t matter anyway” comes off as somewhat of a manifesto for the entire genre.”

What’s important to take away from this is that vaporwave uses data errors and glitches (such as tape slow-down in this case) to repurpose a commercial product and find new meaning within it that falls in line within its ethos. All this is to say that it’s about time Ecco the Dolphin, the game itself, was purposefully fragmented and remixed with glitches in order to join the ranks of the movement it unknowingly lent itself to. And that’s exactly what Brazilian glitch artist Sabato Visconti has done with his latest series titled “エコー ザ ドルフィン Ride the C a t a c l y s m.”

Visconti has produced 15 gifs that see the the 1992 game held in suspended corruption. Frazzled tiles have taken over the coral and rocks while the remnant blue and purple hues are stretched or repeated in luxuriously smeared lines. Given that vaporwave mostly seems to enjoy the capacity of Ecco the Dolphin to let you eschew its goals and swim somewhat freely in its blue oceans if you choose (that’s how I remember playing it)—reaching a kind of meditative slump—it seems appropriate that most of these glitches see the dolphin hanging effortlessly, almost limp, comfortably numb in what was once water. There’s nothing of the original game left, only a voidspace where Ecco can chill out forever in a placid, non-resistant state of being.

Other gifs draw more focus on the game’s large crystals as glamorous icons (more in line with vaporwave’s “co-opting the icons of hi-def capitalism“) or see the dolphin multiplied and swimming in-and-out of the screen, further communicating the idea that there’s freedom in this glitch void.  I could watch these looping gifs for hours, probably, musing on the the game’s lo-fi fragility. They make for an unsurprisingly good accompaniment to “Eccojams Vol. 1.”

You can see all of Visconti’s Ecco the Dolphin glitch art gifs on his website.