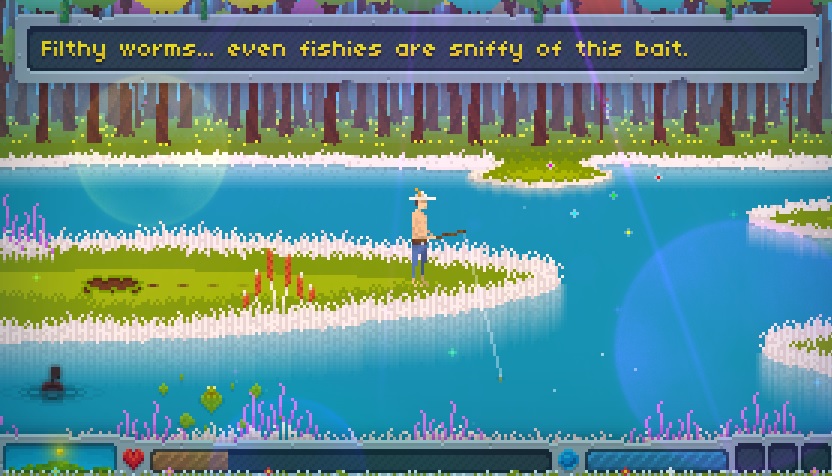 Echo of the Wilds is incongruous. It’s both a search for solace and a wilderness survival game.

That’s the point: Lack of harmony. While you ascend on a spiritual journey, the rumbles in your belly constantly tug you back down into your earthbound body. This isn’t just another tree-chopping, tool-crafting, plant-picking survival game; it’s more than that. But I’d prefer if it wasn’t that at all.

Far too often when wanting to gallivant to a new lake or highland, where a new ancient statue or animal-totem mechanism may await, I’d look down to my energy bar, sigh, and have to sacrifice the far-too-short day to heading into the forest for firewood and berries. But for every drawback like this one, I spot a counterpoint that keeps me undecided towards Echo of the Wilds.

Nightmares of trashed apartments and hallucinations of hypnotic TV sets add a taste of the unsettling.

First and foremost, it’s a game about the soul and spiritualism. So a necessary process is making sacrifices, like attending to bodily needs over the promise of discovery, which almost seems the wrong way round. Another example: You can only learn how to craft spades and axes if you offer food on a pedestal to the higher beings. Sacrifice is necessary for progression.

But it’s also irritating, and distracts from more tantalizing pursuits. You’re told by a ghostly apparition of yourself that you’ve been brought to the forest to forget about the past and to cleanse the mind. Glimpses of what came before haunt you. Nightmares of trashed apartments and hallucinations of hypnotic TV sets add a taste of the unsettling. Demons watch from behind tree trunks.

Piecing together your past and working towards a higher state of being is why you keep playing. The constant need to survive is why you might stop.

But here it is again; that counterpoint. Dying of thirst or losing all your energy isn’t dying in Echo of the Wilds. You appear in the spirit world and have to outrun a horned devil. If you do, you’ll return to the forest as if nothing changed. Next time you “die” you’ll be chased by the devil again, but it’ll be quicker. The following time it will probably catch you.

Then, oddly, the game restarts without taking a breath; as if a never-ending cycle. But you’ve certainly lost the progress you made beforehand. However, like other survival games, the knowledge you—as a player, not your character—have acquired carries over, and so you have a better chance at surviving. The game wants you to suffer, to repeat, and to persist. Like in Dark Souls, you’ve got to be better, or give up.

You can find links to the stores selling Echo of the Wilds on its website.