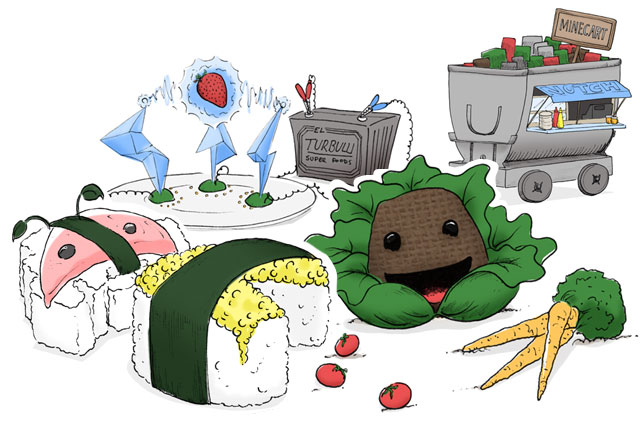 The first videogame I remember playing is BurgerTime for the Intellivision. You are a chef tasked with making gigantic burgers, the components of which somehow exploded throughout a five-story structure of ladders and floors. Walking over each ingredient sends it falling to the level below, eventually stacking into the titular sandwich. But beware the eggs and sausage; an army of the reanimated proteins relentlessly pursue you. (Luckily they’re allergic to pepper.) Originally called Hamburger and released to Japanese arcades in 1982, it proved a grand success and came stateside with a new name, later being ported to most home systems of the day.

Originally called Jonathan and released to Beaumont Hospital in 1981, I’ve yet to prove my success. Time will tell. But like BurgerTime, I was a product of my surrounding influences. You Can’t Do That on Television, a Nickelodeon show where water and slime fell from the ceiling onto children’s heads, told me that kids hated lima beans. So I hated lima beans. The local mall’s most popular kiosk was for something called “Orange Julius,” a frothy sweet concoction that tasted like liquefied creamsicle. I don’t know where this Julius came from, but his home planet’s beverage technology far surpassed our own.

Spirit of the times. One runs out; the other inevitably disappears.

And yet I despised oranges. Perhaps it was the association with youth soccer, where the only allowable snack between halves of senseless running was a bag of orange wedges. We’d drive the fruit chunks into our mouths, smiling with orange rinds for teeth, sucking the juice from the stringy pulp. Those braver than I ripped the flesh from its thick skin and swallowed. I tried this once; the resultant mass sat in my mouth, acidic and tough, resistant to my molars’ tentative gnash. I spat out the filthy carcass and ran onto the field, as if fleeing a chasing ghost.

Twenty-some years later, much has changed. I love oranges (though Julius has allegedly flown back to his homeland). The simple arcade trifles of yesterday have evolved into full-scale interactive feasts. And yet much remains the same. BurgerTime World Tour, a 3D retooling of the original, released last year on XBLA, PSN, and WiiWare. There’s a hunger for old experiences, even as many thirst for the next and the newest. Consider the wax and wane of trends in the gaming industry. Now consider the ever-changing food business. A surprising overlap exists. Perhaps it’s the indulgent luck of hindsight creating invisible links. Perhaps it’s kismet. But somehow, the evolution of games and food have entwined in ways too similar to resist as happenstance. Below, a history of our fluctuating tastes: 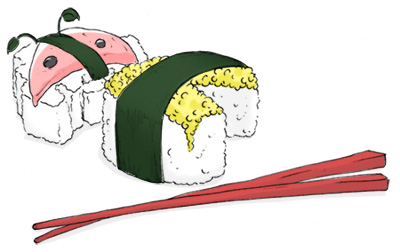 In the same decade that would see the Berlin Wall crumble, an even greater sign of cultural tolerance found its way onto our dinner plates: Asian Fusion. The heavy sauces of French gastronomie were seen as staid, ancient. Home cooks saw the microwavable dinners and casseroles of Donna Reed as the rubbery tripe they’d always been. A brave new world needed bold and spicy tastebuds. In 1983, Wolfgang Puck opened Chinois on Main, an attempt at pairing classic Asian dishes with fresh California ingredients. The combination sparked a nationwide craze for inventive cross-cultural flavors: Louisiana shrimp and lemongrass, hoisin-glazed N.Y. strip steak, fried eggs on spaghetti, pineapples and mangos on anything.

Elsewhere, the direction of influence reversed. A group of Japanese electronic engineers co-opted the product of a Californian and sparked a revolution. Atari founder Nolan Bushnell’s Pong had kickstarted the burgeoning arcade scene in 1972. But the pot merely simmered until 1978, when Taito released Space Invaders. The fervor for the alien-blasting game famously created a shortage of 100-yen coins in its home country. By 1982, the machines had earned over two billion dollars worldwide. Soon games from Japan were taking over, from Namco’s Pac-Man (inspired by a piece of pizza) to Konami’s Frogger. By 1984, after an influx of too many home systems, many built and operated by American companies, the games industry collapsed, only to be revived the next year by the stateside release of a centuries-old Japanese game maker’s first console, the Nintendo Entertainment System. 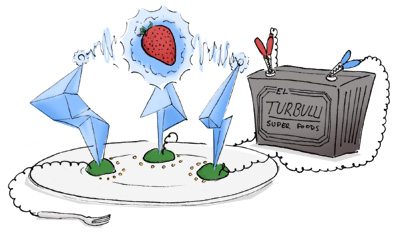 The millennium fast approached. People started freaking out: some of it warranted (AIDS), some of it not (Y2K). We breathed in air suffused with the tang of nuclear meltdown, drank water tinted with acid rain. Rappers were white. Talk-show hosts were black. Into this pre-apocalyptic haze we finally sat down to eat. If this was the end, our last meals would be grand. And so they were. Plates heaped high with chemistry set experiments turned edible. Food critics’ lips buzzed with the term “molecular gastronomy.” (The buzzing on our tongues came from one-part sodium bicarbonate, two-parts xanthan gum, and a drop of emulsified lemon juice.) Ferran Adria’s famed restaurant elBulli became known as a mecca of culinary playfulness. People waited years on a waiting list, paid fortunes to sit at his table and experience the bliss of tomato foam. Something—fear, uncertainty, the incredible wealth of a Bill Clinton economy—made us push the common act of eating to its limits.

On our screens, too, the process became almost as important as the product. Instead of killer apps, game makers touted numbers and horsepower. Bits became magical gems to hoard. Polygons were counted and displayed, heaped in obvious piles like gold doubloons on a self-conscious captain’s pirate ship. Donkey Kong Country wasn’t just a fun platformer; it featured “Advanced Computer Modeling.” Sony’s PlayStation wasn’t just another grey box; these games came on CD-ROMs, would spin and make noise. You didn’t just sit down and play; the futuristic tracks of Wipeout were too crazy, too big: we needed to wait for them to load. When the game began our playing was beside the point. The power of the experience derived from our anticipation for the event. We’d eventually learn such fads were a kind of technological smokescreen. But for a time, the blur of full-motion video, like the freeze-dried strawberry, held us in its mystical thrall. 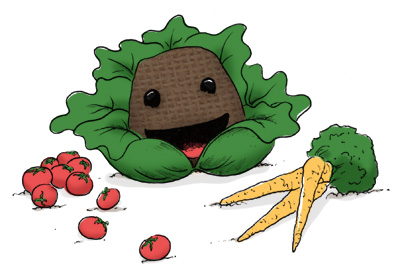 The excesses of premillennial living caught up with us. Our lust for super-sized McMeals imploded, alongside the smoothed creases of our botoxed foreheads. We wanted our Food to be Slow; we plucked carrots from a neighbor’s backyard. With a push from Alice Water’s venerable Chez Panisse restaurant in Berkeley, Calif., schoolyards planted gardens alongside their four-square blacktops. Kitchens from Maine to Montana were buying local. Consumers learned cows are supposed to eat grass, not corn. It was a new century. We wanted to take back control of our lives. We wanted to eat food we made ourselves.

Outside of a few niche hacker communities, games were always created by designers, played by the players. Now, with a growing toolset of intuitive software and an enabled consumer base, players began creating content themselves. An enterprising young computer student had an idea for a game: an homage to his favorite NES titles from his youth. He wrote the story, designed the graphics, composed the music, and programmed the code himself. In 2004, he gave it away for free on the internet. Daisuke Amaya, creator of Cave Story, is the game world’s Alice Waters, paving the way for a generation of players unsatisfied to play only other people’s creations. Sony’s LittleBigPlanet fed off this desire; the most popular section of the game was its robust and all-encompassing editor. You want a better game? Make it yourself. All the ingredients are right here. 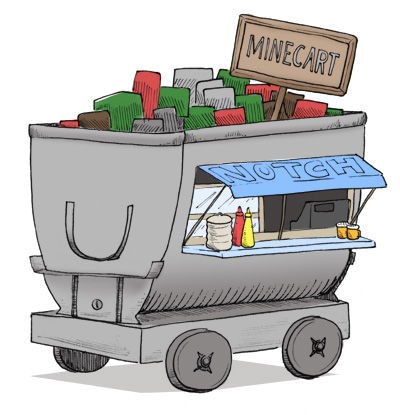 Now it’s 2012. Why sit in a restaurant when you could hail your order from the side of the curb? Food trucks are all the rage. They’re mobile. Independent. Lean on infrastructure cost. They can change based on popular opinion. Anyone can start one up. In a time of economic straits, they speak to our humble roots. Tablecloths match the white of a CEO’s smile. Grab a handmade grilled cheese and sit on that park bench; the dirt you’ll wipe from your faded jeans is the same dirt your ancestor plowed for a bountiful harvest.

Like our favorite lunch spot, many now prefer gaming on the go. A recent study showed that nearly one-third of high school students have an iPhone. Ten years ago, the only handheld games we could play cost $30. Today they’re 99 cents and upgradeable. Even if we play at home, the flexibility of downloadable games allows any entrepreneurial spirit to throw their idea into the wild. Markus “Notch” Persson did just that, allowing players to try his work before it was fully cooked. Now, Minecraft is a veritable force. Even with its singular vision, the final product was the work of many. Remember the hamburger? A single patty may come from as many as a hundred humble cows, as if blown apart and put back together by some industrious, hungry chef. Eat a meal and taste, if infinitesimally, every meal that chef has made. Play a videogame and, like any game, you’re playing the work of the multitudes that came before.

There’s a hunger for old experiences, even as many thirst for the next and the newest.

The shifting tides of food and videogames aren’t all that different. Each belongs to the greater world around them. These ephemeral winds go by many names: trends, fads, zeitgeist. Break it down and the word makes sense: zeit, from the German for “time”; geist, meaning “spirit.” Spirit of the times. One runs out; the other inevitably disappears. So what will we play next? For clues, look to your fork.