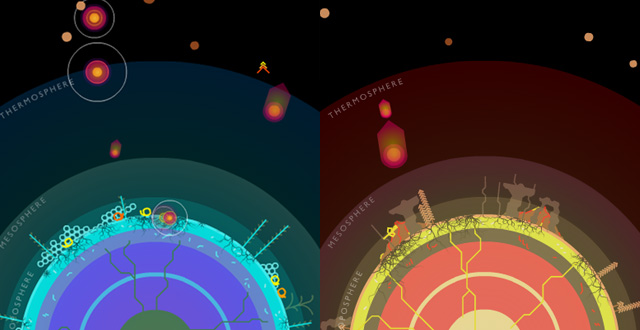 Effing Meteors is a game about jilted love. A very angry god (think Jonathan Edwards-level fury) has decided that he’s no longer pleased with the little planet below, and it now deserves judgment. Punishment, of course, is the domain of the meteors. As this angry god, you desire satisfaction in the form of bringing extinction to the creatures that creep along with no knowledge of the Armageddon that awaits them.

You are faced with several decisions. Death by a million pinpricks, perhaps, as you pummel the planet’s surface with dozens of tiny, glowing stones. Or you could do as I did—bundle the tiny rocks together to form a much larger mass and fling it toward the planet with devastating velocity.

The bigger bodies were the source of my interest. At a certain mass, the meteors are given names and measured by their radius. My first child was named Mordecai. He grew to 47 miles before I flung him to his fate. The next was Doris, and then Eugene, and then there were others. Axe was promising, but never grew to be the seed that I had hoped. But ultimately, that was my fault. I kept Axe aloft, dancing back and forth with my cursor, in a futile attempt to pull in more loose space rock to make him grow. A missile from the planet below sadly got the best of the little fellow.

My favorite offspring was named Carmine—a feisty little bugger who dodged several missiles. He was not the biggest, but I kept him the longest—perhaps a minute—feeding him as he needed. I was sorry to see him go.

Of course, this is all a projection. The names don’t actually change how the meteors function, but in my mind, that simple act of naming made them more than just space rocks. They were my space rocks, and I wanted each to be its destructive worst. There is something a little sad about pulling these little celestial bodies into existence only to doom them. It makes the act of playing malevolent god, well, a little bit lonely.