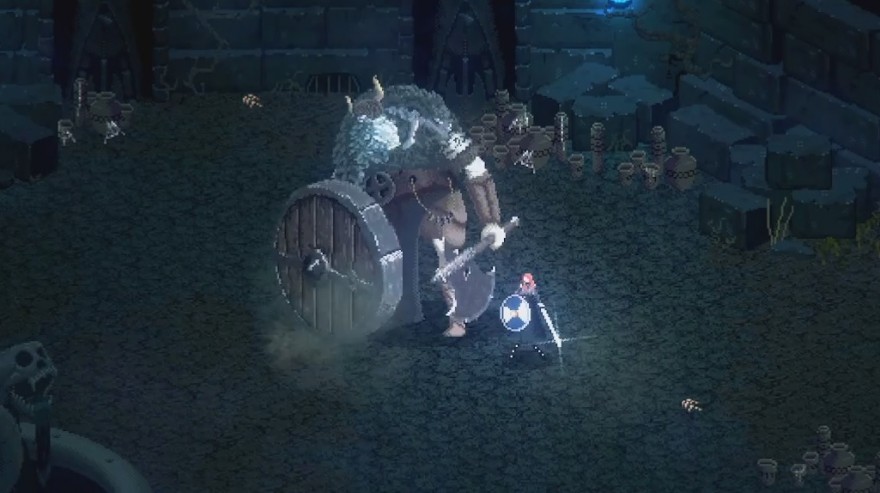 Eitr‘s red-headed Shield Maiden is justifiably pissed off after having her destiny figuratively scribbled over in crayon by the mischievous god Loki. He’s a trickster god, a god of infant-worthy trouble, and Loki is the easiest of the Norse gods to hate. He gives birth to eight-legged horses and fathers wolves while pestering the other gods for the lulz. Plainly put, Loki is an asshole.

this world of darkness, death, and misery

That there are gods such as Loki in Norse mythology is proof of its appeal. These are not the epitome of virtue and zen as other gods are. Norse gods make mistakes and have no problem letting them go with a shrug of the shoulders. Some are tempted by risk and lust and sometimes they give in. They’re all-powerful but simultaneously as prone to the whim of their prescribed personalities as any of the piles of flesh that they look over.

This is why it’s absolutely fine and completely plausible that the Shield Maiden should raise a sword to the gods in anger in Eitr. The new E3 trailer for the game shows her on the way to reclaiming her fate, swooping around the sluggishly thrust blades of the lurching Jotunn with the agility of a small bird, and picking off a horde of surrounding skeletons with a plucky bow and arrow. At one extreme she faces gigantic foe that crash huge shields to the ground in frustrated grunts as she stabs their ankles. While at the other end of the scale are the unwise sewer rats that scuttle at her wearing a fresh coat of scabs.

But in between the meticulous precision of these battles—requiring command of movement and stamina—there is respite. The Shield Maiden can only fully recover while sat at the glow of a bonfire. And other warriors join her for the rest, coming in all shapes and sizes, all probably as angry at the gods for letting Loki plunge them into this world of darkness, death, and misery as part of his laddish tear across the mortal realm.

In its debut trailer, Eitr appears to us as a game of starts and stops. You push a skeleton over here and pull a sword out of a leather boot over there. Essentially, you’re doing the dishes and feeding the cats because your parent-gods are too busy getting mad-drunk on the town and the babysitter is trying to blow up the kitchen. It’s time to wreck house and then clean it all up with blade and bow.

Eitr will be heading to PlayStation 4 and PC in 2016. Check out its website for more info.