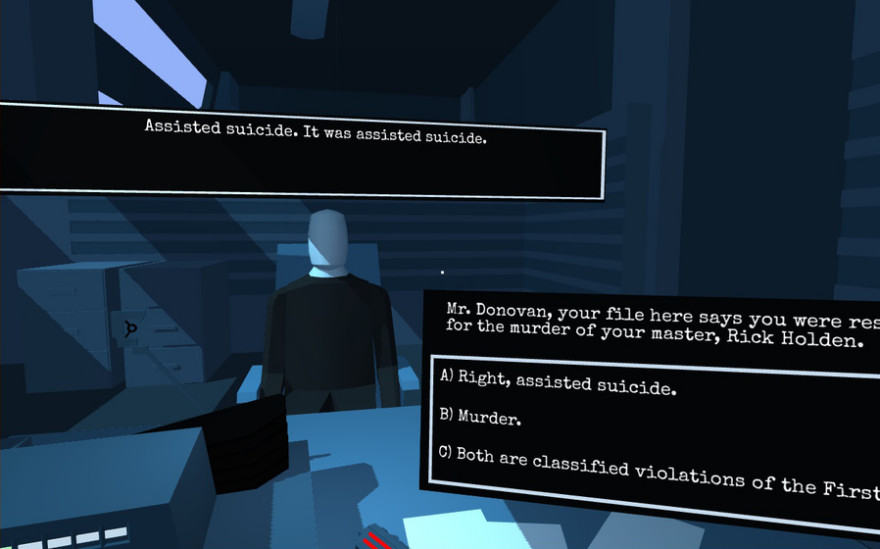 Sci-fi and cyberpunk fiction often asks questions regarding the fine line between programmed responses and human emotions. Automatons and humans: are we really so different?

But rather than just ask questions, Electric Tortoise shoves you a little closer to the driver’s seat. It presents the opportunity to lead the charge in your very own Turing Test, performing an interrogation against a robot accused of murder, just like in I, Robot.

this could be a very clever flip of your understanding of your own sentience in the game.

It takes place in a cold, blue office, a gun lying upon your desk next to the blank monitor of assorted future-tech, as a ceiling fan whirs above your head. Mr. Donovan—the robot—says that it didn’t murder its master, but assisted in his suicide.

From this starting claim, you’re given three choices to decide your stance towards the robot’s case. You don’t have any prior information to go on, so your choice doesn’t really have much weight to it, making it pure role-playing rather than an informed response. Either you can agree with the robot, reaffirm that you’re calling its crime murder, or remind it that the First Law of Robotics has been broken either way.

The first playthrough is a gripping read. You learn that Mr. Donovan’s master, Rick Holden, was unstable, making peculiar requests including sexual favors and, eventually, assistance in his own suicide. However, a verdict will be reached in just a few minutes, and the final binary choice is sprung upon you suddenly. It feels like an attempt to explore your morals, but the consequences being near-identical turn it into a question of whether you want to use the gun that’s been staring at you the entire time, or not.

Playing through Electric Tortoise again reveals that the choices you make don’t affect the game’s outcome; they’re an illusion.

Now, this could be a very clever flip of your understanding of your own sentience in the game. This illusion of choice draws attention to the fact that you are only able to respond to the conversation based on the programming of the game. Aren’t you acting as if a robot yourself, then? The lingering question is similar to Blade Runner‘s, in that you don’t know if you’re seen as human or an automaton inside this simulation, just as it’s unclear as to whether Rick Deckard is an android or not.

However, that may be giving the game too much credit. The focus is undoubtedly on whether the robot opposite you is capable of human emotion and free will, and if so, whether that affects your ability to convict it as you would any other robot.

You can play Electric Tortoise for free in your browser on itch.io or Game Jolt.