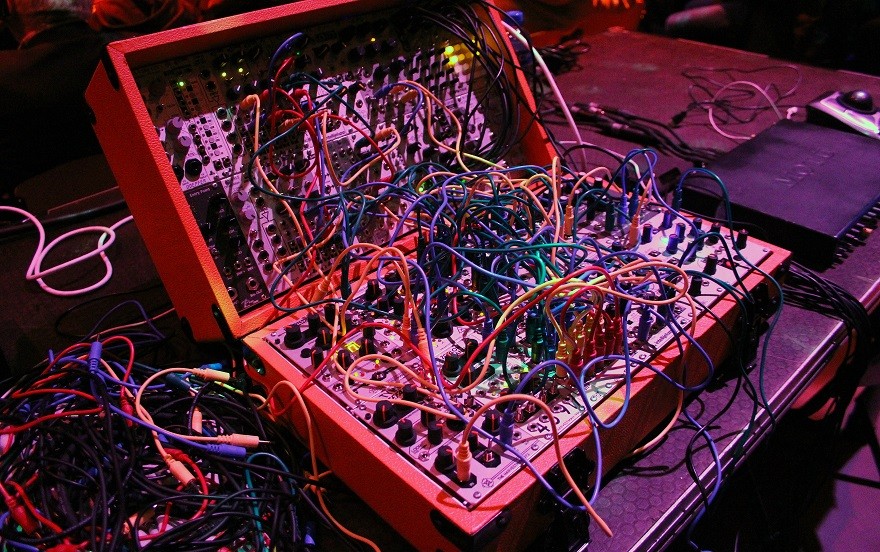 Keith Fullerton Whitman has spent decades exploring electronic utterances. He first began playing with them on his Commodore Vic20 when he was ten, but eventually moved on to study music at Berklee. By the early aughts, when software tools for creating electronic music were getting cheaper and easier to use, Whitman was nevertheless digging deeper into the intricacies of making music with modular synthesizers. Unlike softsynth programs that can run on any computer, a modular synthesizer is a free-standing piece of hardware whose only inputs and outputs are electric voltage; the equivalent of making music using C-3PO’s entrails.

As he explained in a recent interview with the music software company Abelton, finding your way around modular synthesis is “like building a jigsaw puzzle before you can appreciate the picture.” But the opacity of this process eventually gives way to relationship defined by immediacy.

“You can stand at the modular and all it does is make sound,” he said. “What a beautiful thing that is. No diversions, no Facebook, no email. That’s it. It only exists in its own world to make sound. There’s a morning like today, where I don’t want to face the world or get on the internet, so I turn on the modular and by the end of the day I’ll have five minutes of cool sounds.”

But the challenges involved can be discouraging for artists. This was part of the impetus for Richard Flanagan’s FRACT OSC, a virtual synthesizer video game, where players solve puzzles in order to get the materials they need to outfit a studio and compose new electronic melodies. “There’s a really cool music shop here in Montreal that sells all kinds of modular gear, and even I go in there and go, ‘Oh man, I don’t want to touch anything, they’ll know I’m a fraud,’” Flanagansaid in an interview with Rock, Paper, Shotgun. As a result, part of the aim of FRACT OSC was to simply encourage people to have fun “just tweaking knobs, solving puzzles and making sounds.” Putting gear-centric music mixing in the context of game made it less intimidating.

Even so, modular synthesizers aren’t for everyone. Rich Vreeland, who created the soundtrack for FEZ under his “Disasterpeace” alias, used Reason’s Thor synthesizer program to create his 2011 album, Rise of the Obsidian Interstellar. But the program’s UI still relied on digital displays of modules and cord patching, they were just being shown on a computer screen rather than a physical rack. As he confessed to AudioSlap, “I got fed up with the whole visual patch-cables-from-one-rack-to-another interface. It was too much like hardware and I got sick of it.”

This hands-on experimentation this precisely why Whitman loves them, however:

“Some of the best sounds that I’ve made have been at two in the morning, half drunk; I’m trying to get a particular sound, then I miss the right jack and get some totally odd squealing noise and think: This is great, I wonder what’s going on here, and I’ve got an output plugged into another output. And they’re fighting each other. That kind of tactility, the way the voltage moves; it’s actually electrically happening in the cable. It’s not a stream of numbers, it’s voltage physically battling voltage. There’s definitely a pure physicality to it that is very attractive to some people.”