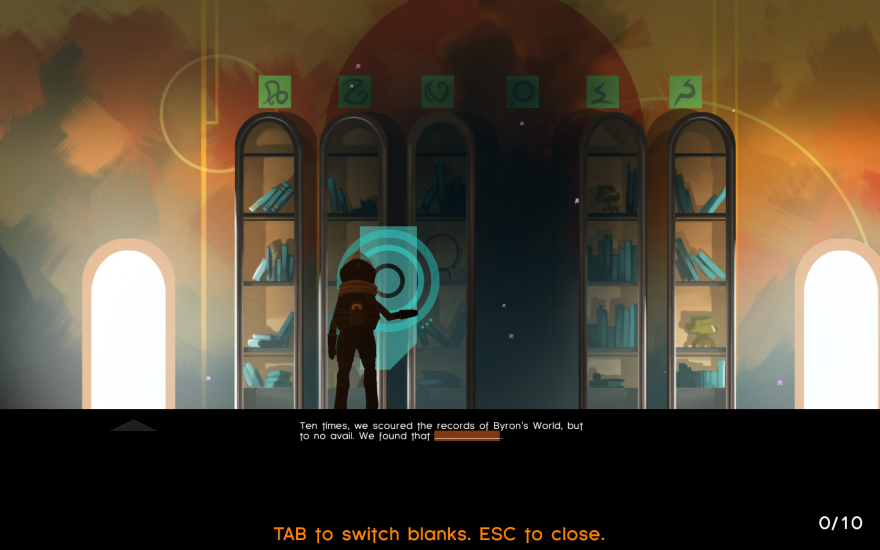 Title:
Elegy for a Dead World

Floating is used as a meditative, relaxation technique, suspending people in a sort of free fall that separates them from stress, grounding, and weight. It’s why a lot of guided meditation exercises start off by offering this idea. “You are floating on a cloud,” the guide will say. You will feel it, your body becoming detached from gravity and the weight of the ground. Or at least, you hope so.

In Elegy for a Dead World, you start off floating; beeping and voices seek to ground you in some reality that ultimately isn’t important as you journey into three worlds where you walk and float completely alone. It’s nearly silent, but it’s peaceful, empty, and wonderful. I wanted to write. I yearned for it. The game demanded it.

This is the basis for Elegy, created by Dejobaan in conjunction with Popcannibal. The player is thrown immediately into a meditative state, surrounded by stars and portals to desolate environments where there is nothing to do but write. The works of others are offered to me—Byron, Shelley, Keats—but they don’t matter beyond base inspiration. The worlds you can enter are sparse, familiar in their desolation, futuristic design and vast emptiness. As a faceless astronaut, you have the privilege to walk in small sections of these worlds and craft stories. Elegy provides various prompts for each portal, some having fill-in-the-blank details like a semi-serious Madlib. Others are freeform exercises, created with no restrictions for the writer.

I wanted to write. I yearned for it. The game demanded it.

I’ve seen all kinds of stories, from ruminations into humanity and the apocalypse to a delighted exclamation about T-bone steaks. As you create, the game allows you to read the works of others. For a game that has very few playable elements, this is the only feature that stands apart, allowing writers to earn “commendations” for their work as a way to get the only achievements. You can choose not to publish your story, but that’ll keep you from experiencing one of the only components of Elegy besides the act of writing.

And that’s the weird thing about Elegy. It’s a writing prompt creator, interactive and connected to a budding peer-review network. For writers, this is a dream—to have the peers built into the software, along with prompts to choose from. These are the reasons people take creative writing workshops, join forums, purchase books on writing. It’s all about the craft, going into a meditative, calming state where words tend to flow. Exploring the worlds through each portal, I feel compelled, brought into that other state of being where stories are created. This is a place writers are always searching for, and in Elegy, it seems as if it was the goal to create a shortcut to it.

But what about the people who don’t want this space, or want something more? Elegy isn’t much more than a writing prompt/literature simulator, and besides the three worlds and various prompts, there isn’t anything else. For an experience that forces writers to interpret beautifully constructed, unique worlds, it’s a shame that there are only three. Despite multiple prompts, there is little motivation to try them out besides the promise of commendations, as the worlds stay the same. You can only get so much out of it—maybe an hour or two of creativity—before it abruptly vanishes into staticity and boredom. I was once relaxed and meditative, but now I’m restless.

Playing Elegy you have to wonder what it was for: whether it was to create a community of storytellers, to inspire people to write their own stories, or to just celebrate the art of writing. Because it’s there. The act of writing itself, that the player is forced to craft to even experience a game, is a core element. It’s not necessarily a new way of interacting, but giving you the opportunity to create your own stories instead of throwing you into the middle of one is in itself worth a look. Artists can theoretically use what they write in spaces outside Elegy, harness the creative energy and state of being in such a way that they can become productive elsewhere. They can maybe use the stories they write and expand on them, shaping more detailed worlds that can move them forward beyond the basis that Elegy provides.

The latest from Dejobaan therefore seems like a stepping stone, a strong premise and peaceful beginning with little longevity and little to do outside the foundation of the game. You have to wonder if there will be more to write in the future.