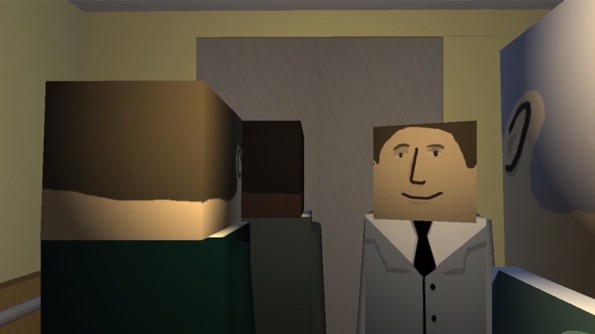 Contrary to what some commentators seem to think, social avoidance is not just a product of the digital age. For at least as long as cramped elevators and other disconcertingly confining environments have existed in office buildings, people have found new ways to avoid eye contact and thus avoid small talk with co-workers:  ”In the years before smartphones, riders were forced to inspect their clothes, study their visage in reflective ceiling above, and when all else failed, simply stare fixedly at the floor,”writes Kyle Vanhemert in Wired. Now a game called “Avoidance Training,” developed as a proof of concept by Rachel Knoll at the Royal College of Art in London, uses head movements and eye tracking technology to simulate this experience of desperately trying to avert the gaze – only you’re in front of a computer, manipulating a blocky character with parodic elevator music being piped into the background.

Knoll’s game is part of a growing genre of “persuasive games” that serve as commentary on social issues – in this case, the very meta issue of digital culture. Many of the most popular video game environments encourage us to treat anything that moves as a hazard, while smartphones have only made it easier to avoid striking up conversations with others. Putting these activities on a screen with a first-person player character highlights the awkwardness – and difficulty – of a behavior that seems entirely natural in a virtual environment. Though this game is just a proof of concept for now, the increasingly lightweight equipment involved in head and eye tracking means that, aside from its benefits for dozens of psychological fields, it could become a new form of immersive gameplay (or “training,” as Knoll calls it) in the near future.

Check out a demonstration of “Avoidance Training” below.