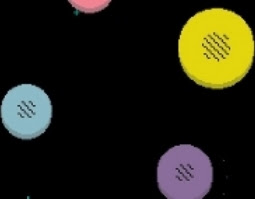 When the iTunes app store launched in 2008, Apple’s touchscreen device faced the dubious challenge of introducing buttonless play to the masses. The depth of play possible on a gyroscope-equipped, all-touch device was up in the air, and growing pains produced an easy target: virtual buttons. Controller mimicry still isn’t a strong suit for the platform, but there are many great games that work well within its limitations. Sword & Sworcery, Super Hexagon, and Angry Birds all perform wonderfully on mobile, in part, because they play it relatively safe control-wise. “Simple and intuitive” is the common description. But like a snake eating its own tail, all have transitioned back into the world of physical controls, proving that their design is not dependent on touch. That won’t ever happen with Eliss Infinity.

If you were to slap buttons onto this game, you’d kill it. Like putting Mega Man on the iPhone, some games are so hardwired to the interface they’re originally designed for that recontextualization would be murder. Here, that interface is multi-touch, implemented in a way that proves deeply challenging experiences with sophisticated controls can live solely in the mobile space. The game is overtly frantic and frustrating by design, leveraging all its available assets—that is, your fingers—to construct hard-won puzzles inoperable on anything but a touchscreen.

All of which can be infuriating. Not because Eliss Infinity is unresponsive or poorly designed, but because I am. Using multiple fingers, you have to maneuver a growing number of planets around the screen, keeping different colors from touching. The larger goal is to guide planets of the correct size and color into rings which briefly blip in and out of existence. Since the planets ready at your fingertips will rarely match the ring’s size when it appears, you’ll have act quickly to resize them, and freeing up the fingers needed to do so comes at a cost. At least two fingers are required to smash similar colors together and grow a planet, or to pinch one apart into two smaller bits. That’s two less fingers to help you keep the other differently-colored planets from hitting, which will end the game should they touch for too long. You do this dance until the sizes match up, but take too long and the ring disappears, making all your effort for naught.

It is an antithesis of the zen puzzler.

Success, then, is won by dexterity, testing your ability to consume information quickly, form strategies in the blink of an eye and not fumble the controls in hurried execution. If the Game Over screen falls into place, there’s no faulty controller, laggy input or wonky virtual buttons to blame—just your bumbling digits. It is an antithesis of the zen puzzler, with stages that aren’t constructed to be meditated upon but reacted to. The controls and rules of the game work together to create a variety of strategic options, but mull them over even for an instant and you’ve probably already lost. You are asked to consider many things at once, all while doing many things at once. This kind of multi-tasking would be impossible to satisfy with buttons.

A stylishly minimalist design and generous learning curve keep the game’s true tough-as-nails nature obscured just long enough to let it get its hooks in you. It teases you with the possibility of many solutions, keeping your fingers cramped as you test out hypotheses and try not to lose control. Things shade from deceptively simple to seemingly impossible with an almost imperceptible malevolence.

That sense of progression and discovery are part of what makes Eliss Infinity so special; the game is trying to teach you something, something you’re not used to learning, and once you can prove you grasp the lesson, it leaves the remaining learning up to you. Many times you’ll know what you are supposed to do, but executing that strategy successfully is another story. Repeated failure becomes the norm, but through trial-and-error you eventually fall back into the mesmerizing rhythm the game first introduced. When the game is at its worst, hurling masses of color, black holes and comets your way, it feels hopeless. If you somehow win by the skin of your teeth, your fingers shaking in place as the last planet explodes, the feeling of panicked elation that follows is unlike any triumph found in any other game, regardless of the platform.