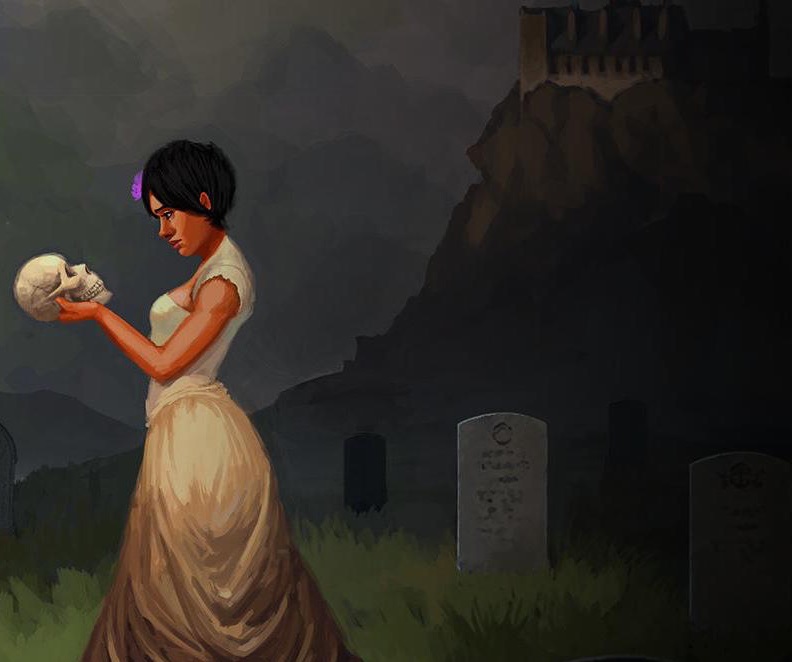 The real tragedy of Shakespeare is that most modern readers get introduced to his work by being force fed it in high school English class. Broadly speaking, the standard curriculum for teaching Shakespeare to high schoolers has consisted of: a) expecting them to engage with the subtleties of a dramatic Elizabethan-era play by reading it alone in their rooms at night for homework, before b) making them memorize and regurgitate the sweeping thematic conclusions their teachers tell them is true about it, 2-8 pages at a time.

It’s no wonder why there’s little love lost between the survivors of high school English class and all things Shakespeare. For Katie Chironis, team leader on an upcoming adventure game set in the world of Hamlet, bypassing people’s distaste for Shakespeare has been an acute challenge. “Many people hear ‘Shakespeare’ and have PTSD flashbacks to those day, being forced to read pages and pages of dry iambic pentameter and absolutely hating it,” Katie explains.

But Elsinore, which recently launched on Kickstarter, hopes to reinvigorate our relationship with a Shakespeare classic, by putting players in a much more active and alternative role. In the game’s version of Hamlet, you play as Ophelia, who suddenly starts having visions of a great tragedy befalling the castle in four days. Inexplicably, the onset of her visions also throws Ophelia into a time loop, where she must attempt to stop everyone’s impending death over and over again.

(Talk about a solid justification for Ophelia’s oft-debated madness, am I right?)

But hold on, some of you might be thinking, isn’t tragedy by definition a series of doomed and unstoppable consequences? Well, as Katie explains, “the time loop mechanic is meant to teach the concept of tragedy in an interactive way.” The concept for Elsinore was born out of a self-made challenge the team set themselves to bring classic tragedy into the context of a typical videogame power fantasy. “We were curious about combining the two drastically different elements, one where doom is inevitable, and the other where winning is a given. We ended up with: well, what if the player is told something awful is going to happen, but then is given a sandbox and an infinite number of tries to change that fate?”

For those who roll their eyes and cringe at all the stupid mistakes Shakespearian characters tend to make before inevitably winding up dead, Elsinore will be something of a be-careful-what-you-wish-for situation. Because here it is, your wide-open invitation to stop the tragedy yourself. But Elsinore will quickly teach you that it might not be as easy as it seems, and you’ll have to fail considerable times before finally making any effective use of the tools and knowledge at your disposal.

The story’s sandbox resets with every loop, altering each playthrough based on how your specific interactions affect the other characters’ behaviors. As Ophelia, you can set off a whole different chain of events depending on whether you lie, befriend, help, or even assassinate certain characters from the Hamlet universe. Interestingly, in the context of the game, understanding the intricate motivations behind each character in this tragedy—like the mysteries of Horatio or multi-layered influences on Gertrude—isn’t just a fruitful thought experiment. It’s a matter of life and death, giving the player more leverage in their attempts to manipulate the right ending.

Katie says that adapting Shakespeare to the videogame form has been an intriguing journey throughout. Of course, as a dramatic masterpiece, the story of Hamlet itself provides “a rock solid structural foundation, which allows us to build some beautiful new things on top of it.” One notable addition to the Elsinore team’s version of Hamlet is a much-needed diversity added to the casting.

In the four centuries since Hamlet was first performed by a (presumably) all-white male cast, we’ve seen nothing but “traditional” (and I use that word loosely) casting reproduced over and over again in every way, shape, and form. So, instead, the Elsinore team decided “to re-examine our conceptions of these characters to see if [they] couldn’t come up with some more interesting interpretations,” Katie says. “We just started asking ourselves: are these characters white because they really have to be white, or just because everyone else portrays them that way?”

As it turns out, the narratively and historically sound alterations Elsinore brought to the cast not only added to its variety, but also added more layers of motivation to the play’s many characters. “Our version of the characters are spread across the gender and sexual identity spectrum,” Katie gives as an example, “which in turn ends up impacting the way they relate to other characters in the game.” Meanwhile, Horatio’s status in the story is informed by the additional Indian/Roman coast identity, and Rosencrantz and Guildenstern are both revamped as women of color.

Elsinore‘s elaboration on classic Hamlet characters also allowed the team to “fill in some of the many things the play stays silent on: like what was Horatio’s childhood like? Or what is Gertrude afraid of? We’ve had to expand a lot. And the decisions about their identities and portrayals was all part of that same process.”

Like many of the more female-centric interpretations of Ophelia in recent times, Katie hopes Elsinore‘s portrayal of its protagonist gives the character some of the justice she deserves. “In school, I felt like Ophelia never really got a fair shot in the plot,” Katie laments. “She’s clearly intelligent, compassionate, and observant. I’ve always felt like if there was anyone who could ‘fix’ up the plot of Hamlet a bit, it’d be Ophelia. She lives in an era where women are trivialized and ignored, which makes her the perfect ‘secret agent,’ so to speak, to manipulate people into doing things without them even noticing. Which is really the core of Elsinore‘s story mechanic.”

Though, ultimately, the game hopes to not only be a more inclusive, but also more accessible exploration of the Hamlet universe, the team evidently remain die-hard Shakespeare-purists at heart. “We’ve kind of been tossing around the idea of adding an option to do the game in Elizabethan English—for the hardcore nerds,” Katie teases. “But we’ll see.”

You can go support Elsinore on Kickstarter and Steam Greenlight now, as well as check out the website for more about the development process.