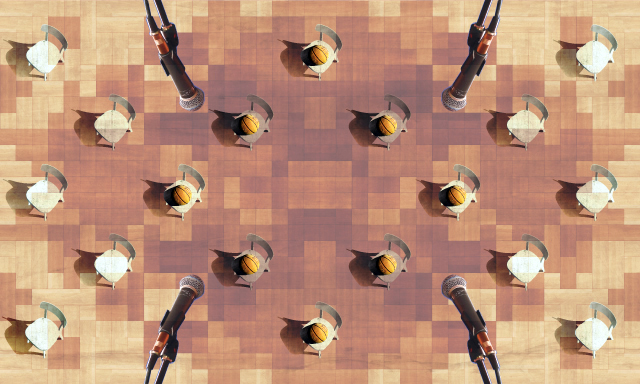 Sometimes you really want to tell the reporter to just fuck off. You played like crap, you lost a close game to the Bobcats, and so you look down at the controller in-hand for the button to tell the reporter to “go to hell,” only to realize that option is not available. Fine, they’re just doing their job. That’s the media for you.

But when the reporter asks “What would you have done differently so as to not lose the game” you search hard for the button that starts the animation of your player flipping over the press conference table in disgust and storming out of the arena.

A brilliant bit of design, the developers at 2K Sports who created NBA 2K12 included a press conference experience in the “My Player” career mode of the game. It first appeared in the 2K11 iteration of the mode, but is refined in the latest installment. In a genre that focuses heavily on the “on the court” aspects of the game, pouring significant effort and resources into getting the game to play like the sport, the inclusion of an emergent narrative system in the form of a press conference is compelling.

Borrowing heavily from the Mass Effect dialog mechanics, at the end of every game your player is confronted with a question from a member of the press core covering the game. After the basketball game, the camera cuts to an image of your player, dressed to kill in suit and tie, sitting in front of a sponsored backdrop with a microphone in front of him. On either side of him are the team’s head coach and teammates. A voiceover begins asking your player any of a number of questions  about the events of the game. Sometimes it’s the male reporter, other times the female reporter, and you become somewhat familiar with their identity by voice alone, even though you never see anything other than the back of their heads. There are many questions, and while occasionally you will hear a repeat if you play long enough, the diversity of the questions designed into the game  is truly impressive. Some are direct, like asking how you felt about taking a last-second decisive shot; others are more nuanced, like when you are confronted with a poor shooting night.

Once the question is asked, the text of the question pops up on the bottom of the screen and, just like in Mass Effect, you are presented with four answers  mapped to four controller buttons. You are only given a portion of the response, or a position. For example, in response to a question about your role on the team, you might be presented with choices like “I’m disappointed” or “Not thinking about that yet.” This “mini-game” of sorts is to deduce what kind of stance your player might take with the limited information you are given. Based on how you respond, three variables are affected: your chemistry with your teammates, your local appeal to fans of your team, or your broader league-wide stardom.

At one low point in the career of Austin Spencer, my latest NBA rookie, my team, the Utah Jazz, had lost 10 games in a row, starting the season with a record of 2-15. After the latest drubbing at the hands of the Lakers, I was dreading the forthcoming press conference. More questions about how much we sucked to try and delicately answer. To my surprise when the cameras turned on, my coach, who had always stoically sat to my left in a show of silent support, was gone. The chair was empty.

“As I’m sure you’ve already noticed, Coach isn’t sitting next to you here tonight…” she begins.

Holy shit. They fired the coach!

I couldn’t believe it. Answering this question, about why the coach was fired all of a sudden, had more meaning, more significance. What had I done? Was this my fault? Could I have played better and would he have been spared his job? Why did I find myself even caring about this guy? It startled me to see an emergent narrative and persistent world in a sports videogame.  These give the game tremendous richness as a role-playing experience. The richness of the press conference is not in the answers it provides about the game, but in the questions it compels the player to ask about what happened, and what is coming next. Sports videogames have pushed the boundaries of genre by including career and “my player” modes for a number of years now; the 2K12 press conference further extends the game beyond a sports simulation to an account of the athlete’s experience in the culture of sport.

New Star Soccer provides an interesting point of comparison. This recent, relatively small multi-platform sports title is literally a deep role-playing game; its simple graphics and basic interactions belie a multilayered persistent  world of international professional soccer. New Star Soccer is basically a career mode with interspersed soccer mini-games. The real heart of New Star Soccer is the interactions off the field. You can train your character, or play a Memory-style mini-game to interact with your teammates, your boss, your sponsors, or your girlfriend. You earn money by playing in soccer matches, and you can use that money to buy clothes, automobiles, or mansions. You can also buy cleats to improve your skills. Every action in the game takes energy, and you can also purchase energy drinks to replenish it.

While the mechanics of the mini-games are simple, the evolution of your player is complex: growing in skill; signing new, more lucrative contracts; getting dumped by your girlfriend; making up with your teammates over a round of golf; getting sponsored; and becoming a star, all feel as deep and enriching as any role-playing experience. Importantly, there is enough blank space for you to contribute to the storytelling of your soccer star. For example, after a number of weeks of poor play on the field, my soccer player was benched. It was not clear what specifically I had done, and I wasn’t sure how exactly I would get back in the good graces of my team’s boss. But a combination of successful mini-game performance on and off the field somehow renewed my boss’ trust, and back to the starting lineup I went.

New Star Soccer is simple compared to a robust and intricately designed AAA sports title like NBA 2K12. What the two games have in common is intelligent design for narrative possibility. What matters is not the story that is being told so much as the room left for story making. In the case of the coach getting fired in NBA2K12, I was left to wonder how the game mechanically chose such an outcome, and what I could have done differently to affect the outcome. I was left to fester in what Ian Bogost calls the simulation gap, the space between the expression of the system and its interpretation. With New Star Soccer, the intentional lack of information about its system, all that is not explicitly laid bare, invites narrative speculation. Why did my girlfriend dump me? Why is the coach angry? How popular am I? How popular can I become? These are sports narratives, but they make an important observation for many types of games. The space between the game and the play is where the real storytelling resides.

Boomshakalaka! explores the intersection of sports culture and videogame culture.