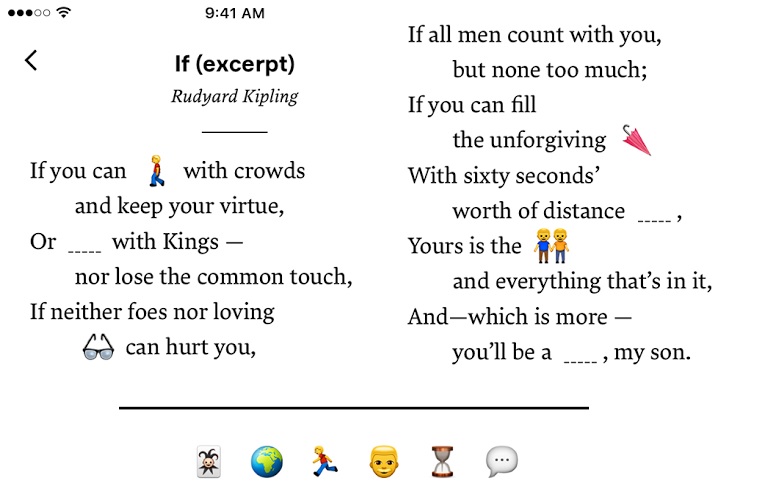 There’s an almost magical quality about tweets by Carrie Fisher, which probably half stems from the fact that I usually have no idea what she’s saying: her tweets are almost entirely in emoji, indiscernible like some new art form that I’m not cultured enough to understand. And with the rise of emojis changing the way we communicate for various mediums, I imagine that my confusion around their growing usage isn’t going to go anywhere.

In comes developer Arzamas OOO’s new smartphone app, Emoji Poetry, a literary game where you drag the “appropriate” emoji into the empty spaces of a popular English poem. As such, the game not only requires the player to have extensive knowledge of poems like Percy Bysshe Shelley’s Ozymandias (or have access to Google), but also indirectly forces the player to understand the nuances of emoji and their ability to suggest words or meaning; the emoji here are all about interpretation and context.

the right emoji to fill in the blanks of the poem

The pool of poetry you can choose from is broad, ranging from the Renaissance era (think Milton) to the 20th century (think Yeats), and Arzamas OOO has done a pretty swell job picking high-class poets—the kind discussed in high-level English college classes. When the player thinks they’ve chosen the right emoji to fill in the blanks of the poem, the app will check your correct answers against the actual poem itself, and further point out which ones you got wrong. It’s a hard game, but proves strangely satisfying.

If you want more information about Emoji Poetry, check out the app’s iTunes page here.