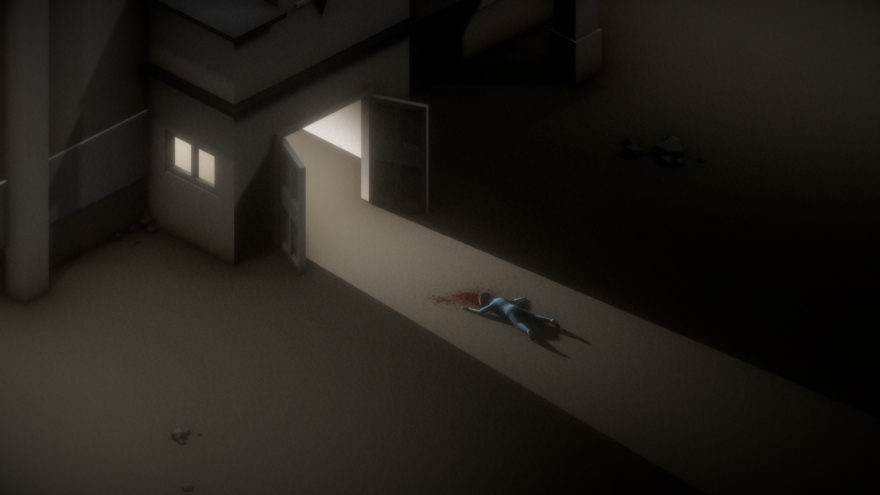 I was expecting Tom Kitchen to be reserved when talking about his upcoming vignette game Emporium. He’s shown plenty of images on the game’s TIGSource thread but not said a lot when it comes to what it’s about, leaving me to believe he wanted to keep it secretive. So I was taken aback when he came straight out with, “overall the belly of Emporium is a conversation about suicide.”

He goes on to tell me that you’ll play a young boy around the age of 12, who speaks with a much older man, both of them victims of suicide at the titular emporium. The game takes place in what is essentially limbo—the place between life and death—where the two characters, unaware of their passing, relive the same conversation over and over. You’ll be able to explore this conversation through dialogue branches.

“I’m keen to look at the parallels between youth and old age, and how much or little your sense of self progresses as you age,” Kitchen told me. “Things are at their clearest when pushed to extremes, so a conversation between a kid and an old man, both at the end of their tether, seemed interesting to me.”


What first struck me about Emporium is its isolated scenes and sharp virtual architecture. Kitchen has constructed a number of vignette spaces—the front of the emporium, a stairwell, a caravan—shrouded in darkness, sometimes with a dead body positioned within them. His skills in visual arts stem from his background in fine art printmaking, which he studied at university, going on to become a screen-printer and illustrator (you can see some of his work here).

“Things are at their clearest when pushed to extremes”

Kitchen only got into making videogames a couple of years ago—leaving his former screen-printing job for the pursuit—which he says is due to the tools to do so becoming more accessible, teaming up with a programmer friend to form Blind Sky Studios. Since then, they’ve gone on to make a four games, including two we’ve covered before: Adam (2015) and Mandagon. Emporium is Kitchen’s first solo game though, which started out a couple months ago as a way to “get more savvy with code, learn 3D modelling and animation.” What was meant to be a two-week project grew as it became more solidified in Kitchen’s head.

He started out with the image of Pilot Cinema above, which was built in 1938 in King’s Lynn, Norfolk, the tiny town where Kitchen attended college. The building was abandoned when Kitchen first saw it for himself, and it was demolished in the summer of 2014, but he attributes it with getting him into 1930s modernist architecture—”lots of aggressive and proud cubes,” is his description. He saw it as a good way to start out 3D modelling as the cubes should be easy enough to place and align. He also took inspiration from constructivism, including the architect Iakov Chernikhov, particularly for his color palettes.

Above, you can see how Kitchen gradually built up the first scene of the game, the outside of the emporium. “I guess it gives a sense of how I block out the scene with basic cubes and geometry, then play with lighting and where to include detail to build it all up,” he said. “I’m working with blender and Unity plus some Unity add-ons to put the whole thing together.”

You can see some of the other scenes in the screenshots below. Kitchen is hoping to be finished working on Emporium soon. He’s working with Richard Jackson, who’s providing the soundtrack with a focus on the solo cello.

You can track development on Emporium on the TIGSource forums. See more of Kitchen’s work on his website and check out his other games here.